Found myself playing host to one of yours on an excavation, sweetie.
Wasn’t one I recognized, but twigged her pretty quickly. Anachronistic talk, even more anachronistic tech (you really should teach them to keep 50th century hologram spheres better hidden; poor girl literally slept holding it).
. . . and then there was the little matter of her calling me “Doctor” when I slept with her.

Sometime after Eve of the Daleks, the Doctor gets a letter.

This isn't even my favorite "matchmaker River, semi OT3" fic I've got simmering, much less a story I particularly love, but there's no point of it sitting on my hard drive forever (terrible screenshot photoshop included), so *shrugs*. Knocking it off the WIP list before my heart gets broken on Sunday.

The TARDIS communication module let out a peculiar whining whirr, immediately catching the Doctor's attention from where she was sat underneath the console, her head deep in a tangle of wires.  "Uh, oh," she said, immediately trying to trace which precarious connection or crossed terminal she might have just bumped.  A second later, however, the lights in the console room dimmed as the whining crescendoed; the Doctor stood up in alarm.  "What are y'doing, girl?  This isn't me."  Localizing the source of the noise to the receiver for the Translevel Communication Array, she arrived in front of the furiously active control panel just in time to see the holographic viewscreen burst to life. 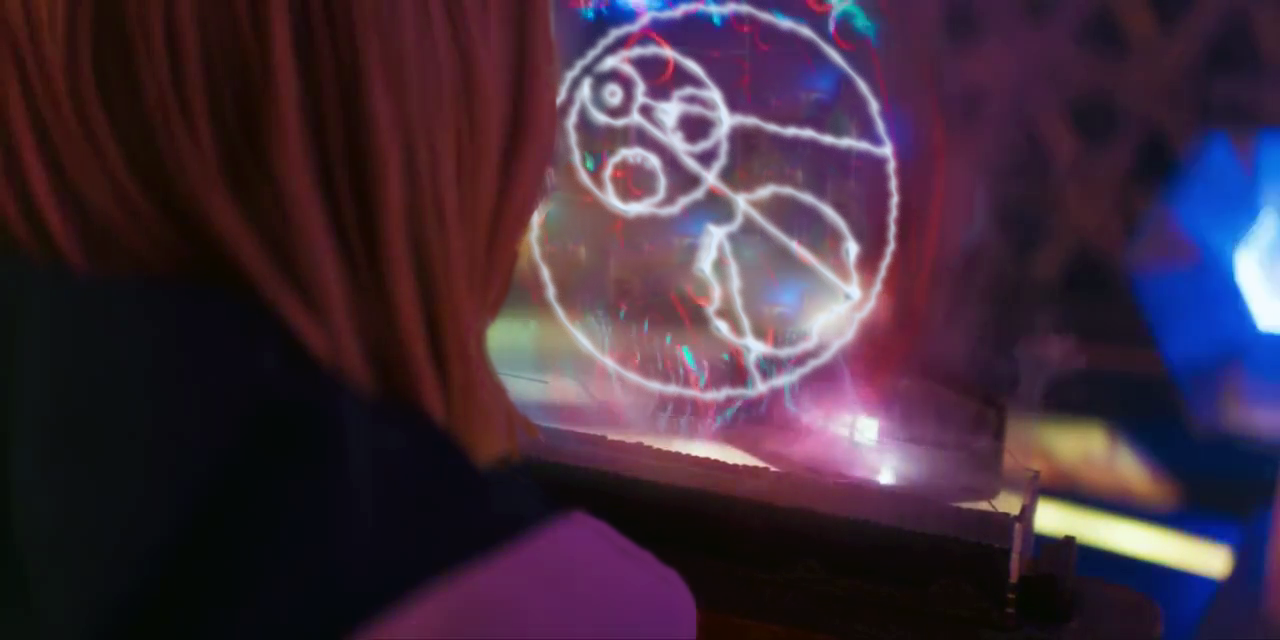 [alt: Over the shoulder of the Thirteenth Doctor looking at a holographic message in Circular Gallifreyan that says "Hello Sweetie."]

"Hello, Sweetie," she whispered to herself, reading the neon Circular Gallifreyan that was almost burning her eyeballs in the dim light of the console room.  She didn't have long to wonder about the implications (i.e. paradoxical consequences!) of a message from her wife before text began spilling across the display.

Found myself playing host to one of yours on an excavation, Sweetie.

She wasn’t one I recognized, but twigged her pretty quickly.  Anachronistic talk, even more anachronistic tech (you really should teach them to keep 50th century hologram spheres better hidden; poor girl literally slept holding it).

She didn’t even realize at first; I said “I usually prefer ‘Professor’, actually,” and by gods, I might be as mundane as a rock compared to a full-blooded Time Lord, but if her brain didn’t run into every slapstick brick wall at once when she realized what she’d said.  Obvious, then, she wasn't just some upstart from the Time Agency with a janky vortex manipulator.

(I know my skills do dazzle, but please tell me I'm right in hoping she didn't
just forget what equipment was on the playing field.  Did you finally ~get that upgrade~?
An invading fleet of Daleks won't keep me away from seeing that with my own two eyes.)

I couldn’t let on, of course — pity, because the girl needed a good shoulder to cry on.  Who better to commiserate with than someone who’s written the book on loving the Doctor from a distance?  But for all I knew then, she was from ages before I met you.  Despite being less-than-subtle with her prized bauble, she was cautious enough to never let me see it activated, so I had no idea what form you are in right now (because it’s child’s play to deduce that a hologram so well-worn in the possession of a woman so besotted can only be of one person — been there done that, darling).

Then again, when has any little thing like someone playing coy with the truth stopped me?  A bit of deep diving into my archives, a discrete sonic scan after she'd fallen asleep (I knew I was right in thinking she tasted of 21st century), peppering in subtle references to names she might know and listening for the skipped heartbeat of recognition -- her Scouse friend ended up right miffed at how I couldn't ~for the life of me~ remember to call him anything but 'Rory', though it was my research assistant 'Harkness' that got the best reaction (please tell me Jack hasn't gotten his hands on this one).

Easy enough to get the timeline sorted, yet I still got the distinct impression she didn't know who I was.  Figured it wasn't proper to derail her off her quest by revealing that her excavation-tent hookup was actually married to the Time Lord of her dreams.  That'll be your knot to untangle, Doctor, though I'd love to see the color of your face (and hers!) when (and yes, I mean WHEN) you have that conversation.

You’re probably wondering how you’re reading this right now.  Rest assured, Sweetie, no rifts in space-time here (at least, not of my doing).

I may have been in 1904, but obviously just for an archeological lark.  Your friend was not the only one with tech, and I daresay mine was a fair sight more up to date (not to mention its wielder a bit more experienced).

I tagged Yasmin’s DNA with this message, coded to transfer to the TARDIS the next time she was in proximity to sufficient artron energy for the syonic beam to kick it to your T-Mail.  I have enough confidence in her to make it an auto-degrading tag, don’t worry; it’ll be completely out of her system in 24 months at the most.

Doctor, she’s a good one.  A lot of what she told me was half-truths, the adjustments you have to make when you can’t exactly reveal to a purportedly-20th century archeologist that you’ve traveled through time and space, but I got enough of a picture of the past three, almost four years they’ve been stuck here.  They’ve been through a lot without really understanding why.

She’s walked through fire for you and she’ll do it again.  It's not optimism so much as an almost hard-headed determination in her, the way she's stepped up to get done whatever universe-preserving mission you've set them on.  In the downtime, during the waiting, the few moments she allowed herself rest, her eyes were the only thing that belied the strain of leading -- they looked so much older than that pretty face.

Reminded me very much of someone.  Tight-lipped man with a blue box and a savior complex, perhaps?

I may not know you right now, but I know You.  Companions have been throwing themselves at your feet since time immemorial, but it's rare that I've met one who's such a match -- and I expect you see it too.  Give this one a shot.  I wouldn’t have used Salazian nucleic acid manipulation tech on a hookup to drop you a line if I didn’t think it would be good for you, Sweetie. 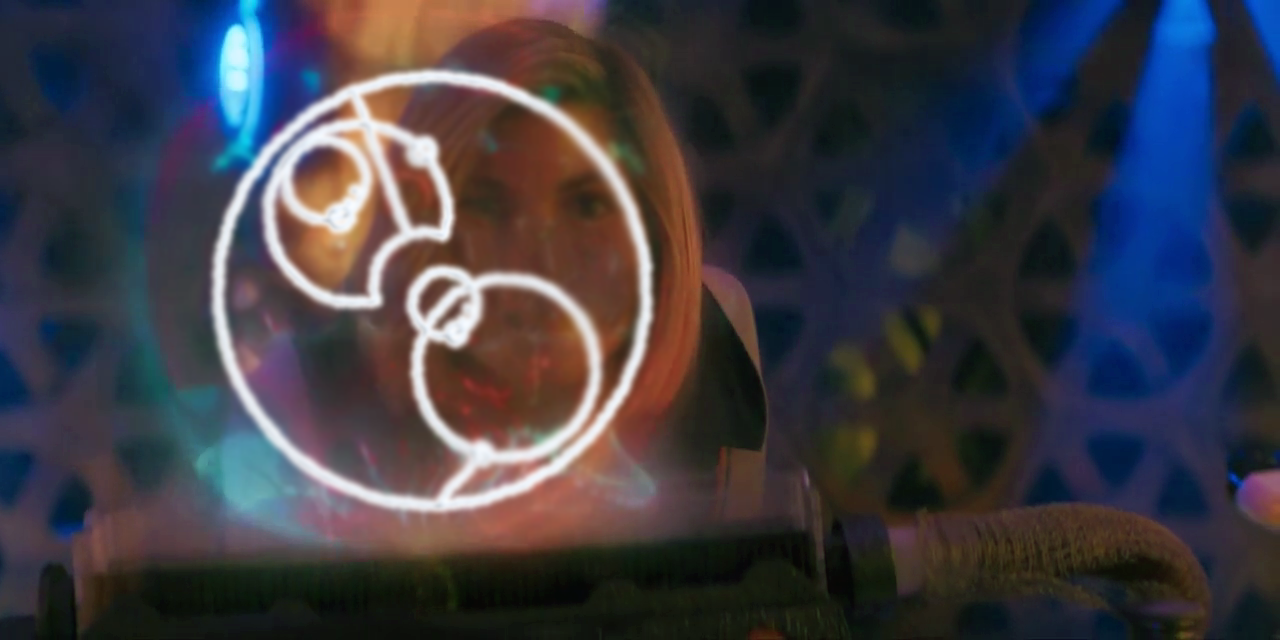 [alt: A holographic message in Circular Gallifreyan saying "Love you." is between us and the Doctor, distorting her enraptured expression.]

As the last words faded along with the light from the holographic projector, the Doctor sighed, shakily running a hand through her hair before slouching forward to rest her head on the console. 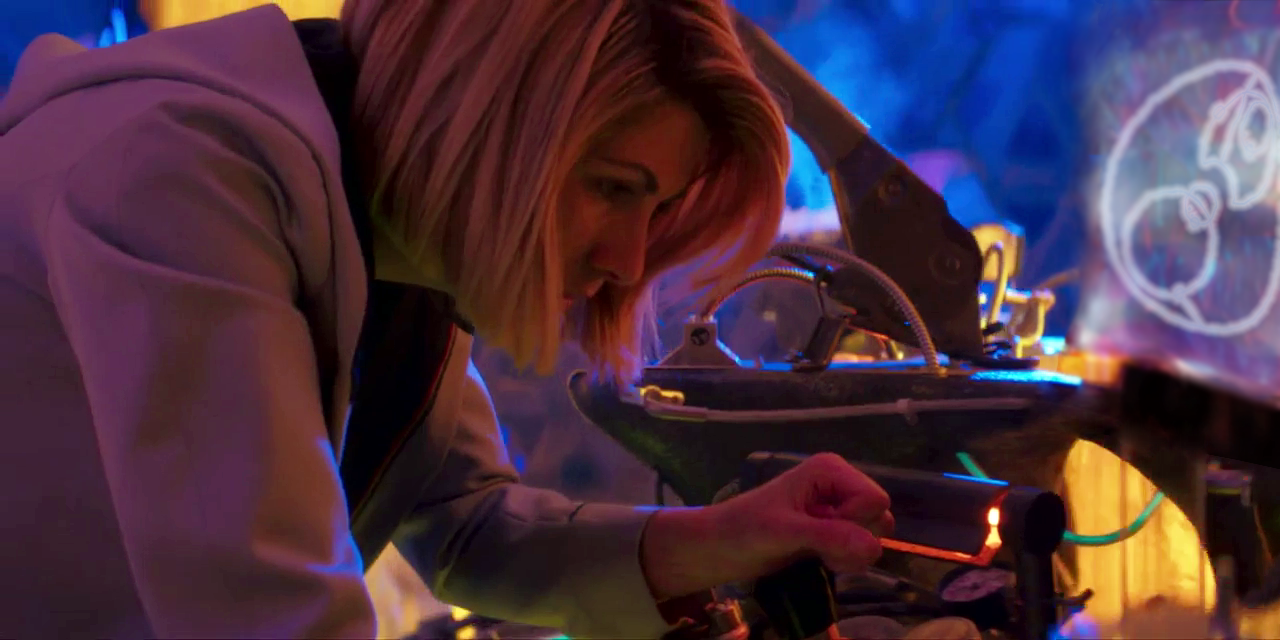 [alt: In profile: the holographic message in Circular Gallifreyan "Love you." is fading as the Doctor slumps down over her TARDIS console.]

The lighting in the TARDIS quickly cycled through a sequence of sunset-hued tones before returning to its normal level, with an accompanying warble that gave the Doctor her answer.

She closed her eyes for a long moment, nodding slowly to herself.