This is my contribution to this year's Bering and Wells Appreciation Week! Day One's prompt was "dancing", and I've always wanted to write something a little Ginger and Fred for them.

There's art to go with this fic! What better style to go with the golden era of musical movies than Leyendecker's art, so that's what I commissioned - I hope you enjoy that too!

“Helena, what are you doing?” Myka asked, breathless from running to where Helena was pulling her, and also a little bit from laughter – Helena was radiating excitement, and Myka couldn’t help but think that this was somehow connected to-

She didn’t dare allow herself to think about it. It couldn’t be; it really couldn’t. Not she and H.G.-

“I have solved a puzzle, Agent Bering,” Helena tossed across her shoulder as they neared another intersection in the Warehouse stacks. She slowed, got her bearings, and then turned to her left, still pulling Myka along with her, albeit at a more sedate pace now. She turned around and sauntered, hands still linked, backwards ahead of Myka, grinning conspiratorially. “Contrary to what you tell people, you do not, or not only, love musical movies for having watched them with your mother.” She lowered her chin, and shot Myka a look from beneath her lashes. “I have seen the way your legs and feet twitch. I have seen the way your torso moves, your shoulders, ever so slightly, but definitely there. You’re dancing right alongside Ginger and Fred, aren’t you, in the privacy of your mind.”

“Oh my god.” Myka could feel the blush spread across her face, and looked away to keep Helena from seeing it. Doing so, she noticed for the first time where they were: the theater district, or to be more precise, the lane along which its largest artifacts were stored – entire buildings, stages, auditoriums, marquees, lighting rigs, the lot. “Helena, what are we doing here?”

“Don’t worry,” Helena replied, causing Myka’s nerves to wind themselves a good bit tighter, “I checked and double checked. It is perfectly safe – and the downside? Well, you already are perfectionist, are you not; so a few hours in which this impulse is heightened will not matter much, I daresay.” She stopped in front of a nondescript door in a wall of corrugated iron painted black. There was a light fixture above it, currently dark, though it lit up slightly when Helena reached out for the door handle, as if in anticipation of touch.

The arm sank down. Helena turned around fully, to face Myka head-on. “Darling, do you honestly think I would endanger you?”

And there it was. Myka blushed again; she knew there was something between Helena and her – no one else called H.G. Wells “Helena”, for starters, but Helena had asked Myka to do so – but that something had never been addressed or… explored. But that same something made Myka very certain, positive in fact, that the answer to Helena’s question was an unequivocal no. And that was-

H.G. Wells was reckless, was a jump before she looked, trust her face and charm to get her out of trouble kind of person. Myka could absolutely envision her poking at artifacts just to see what would happen, not blithely ignorant like Pete but still very similarly indifferent to any consequences. But she would never endanger Myka. Myka knew that in her guts. The same woman who would not hesitate to indulge her curiosity when it only affected her, would rather cut off her own hands than harm a hair on Myka Bering’s head.

And now Helena was giving her that look. Not quite the “I have no tether here” look, more like the “keep an open mind” look – the look she wasn’t giving anyone but Myka, ever. Sincere, that was a good word for that look. Vulnerable, too. Hopeful, a bit more so today than the last few times Myka had seen it. “Please trust me,” Helena said, with that look on her face.

Myka knew she was a goner when she nodded and took a step towards the door. Hook, line and sinker, for that look, for Helena. Not H.G. Wells- well, okay, not just H.G. Wells (as if that wasn’t amazing enough) but Helena, this woman out of her time, ahead of her time, old-fashioned and utopian, giddy over post-its and enthusiastic like a kid about airplanes and rocket ships, beautiful and complicated and enigmatic and fascinating, endless wonder personified.

Inevitable, really, that Myka should fall for her, despite her best-laid defenses. Helena just grappled her way over them, with a swish of her hair and a raise of those clever eyebrows and a glimpse of that intellect and with that look.

The smile she was giving Myka now, as Myka stepped towards her, was brilliant, exhilarated, like a kid at Christmas who is excited to show you the gift they made for you. One hand landed on the door handle – the light flared into happy brightness – the other was extended towards Myka, elegance in every line. “Shall we dance?”

Myka looked down at herself and nodded. This would do; this would do very nicely indeed. The RKO Soundstage had first given her a full skirt gown – apparently that was one way the artifact worked: you stepped in and found yourself dressed for the scene. But you could also put your foot down, literally: if you stomped your foot and willed it, your outfit changed. And a tux was infinitely better than a gown. She’d always dreamed of taking the place of Fred Astaire (how had Helena known? Torso movement, really?!), and this, now – yes. This was perfect. White tie and black tails, the classic Astaire look – she ran a hand over her hair and found it slicked back, tied at her neck in a low, intricate knot that she knew even without a mirror looked like a thousand dollars. She took a tentative twirl – the shoes were perfect, soles sliding across the floor with just the right amount of grip, tops brushed to a shine, fitting her feet like gloves. And, oh how her feet went. She had no idea of dancing, had never learned any moves, but here she went, up the stairs that dominated the back of the soundstage, tap tap tap one foot across the other, tap tap tap on her way down, hands outstretched just so to keep her balance. She twirled again to maintain her momentum, and laughed out loud.

“Oh the marvel of your laughter,” Helena said, fervently, from behind her.

Myka turned around and gasped – if she, Myka, embodied Fred Astaire’s suave evening wear looks, Helena was an amalgamation of every elegant Hollywood actress of the thirties and forties. Her hair shone even more than usual, held out of her face with two glittering combs but falling freely down her back. Her lipstick was red as sin, and her dress a deep, shimmering emerald green. Her face lit up in another brilliant smile at Myka’s reaction and she twirled in place, making her skirt flare out and the bare skin of her back flash white between the dark of her hair and her dress.

And just like that Myka held out her arm, and just like that Helena twirled into it, as if they had done nothing else for their entire lives. Again, Myka laughed out loud, and then there was music; off they went, sparkling with joy, floating on air. Myka could not have put a name to a single step, but that did not matter – the soundstage had become so imbued with Astaire’s perfectionism that once you set foot onto it, your body knew what to do as if you had rehearsed every movement for weeks, and it came out easy as smiling, easy as laughing, easy as dancing.

It was all that she had ever hoped for.

Myka felt as though she was weightless, floating, swaying to the music. And here was Helena, Helena, oh Helena, in her arms, then on her hand, then at her outstretched fingertips, then across the stage, then making her way back to her, then in her arms again. She could feel Helena’s body move – not just when they were cheek to cheek, but all the way across the floor; she knew where Helena would be, what she would do, knew how to match her step for step, move for move. They were in synch, just like Ginger and Fred. When Helena was close, Myka’s arms would frame her, hold her, like she was the most precious, wondrous person in the world. Her every move was designed to show off Helena’s grace, her poise, her verve. Look at her, she wanted to say; is she not marvelous? And whenever Helena twirled away, Myka’s arm would follow, Myka’s entire body would be turned towards where Helena danced. Her own motions were a mere mirroring of what Helena was doing, an homage to her elegance, a hope to match and make shine, until Helena would be back in her arms and they would float again together.

Light of foot, light of heart – Myka wouldn’t have been surprised if they’d found themselves dancing up into the literal air, little as gravity seemed to have a hold on them. The music would rise to a crescendo and she would lift Helena, effortlessly, gracefully, making her dress flare like a comet’s tail. There would be another build in the music and they would jump, twirl, hop across a low banister here, glide up a few stair steps there, as if no weight could ever burden them. Myka had never known a feeling like this; she’d been in the zone before, during physical exertion – fencing came to mind. But fencing was only ever short bursts of activity, not minutes and minutes of this. And the other person, when you fenced, was two sword lengths away, not right there in your arms swaying with you.

It was intoxicating. It was electric. It was effervescent. Myka felt like a bubble in a glass of champagne – suspended, weightless, floating ever upwards. Or perhaps like a bird, swooping through the air with her partner, never and always touching and touched. She had no idea how long they had been dancing; she wasn’t out of breath, hadn’t worked up a sweat, and neither had Helena – but perhaps that, too, was part of the magic of the RKO Soundstage. This time, when the song came to a close and Helena slowed her twirl to sink into Myka’s arms, Myka held her for a moment longer.

“Is this okay for you too?” she asked. “Are you having a good time?”

“Oh, darling, I am quite literally having a ball,” Helena laughed. She bent backwards, and Myka moved with her, lowering her in a gentle dip, then raising them both again. Helena’s hand came to rest on Myka’s lapel, right next to the white carnation. “This is wonderful, never worry.”

And such was the magic of the soundstage that when Myka dipped down to kiss those red, red lips, the music soared up around them – although, it had to be said, the sensation of her world shrinking to a small circle and fading to black was probably more a result of how incredible the kiss was, rather than any movie magic. 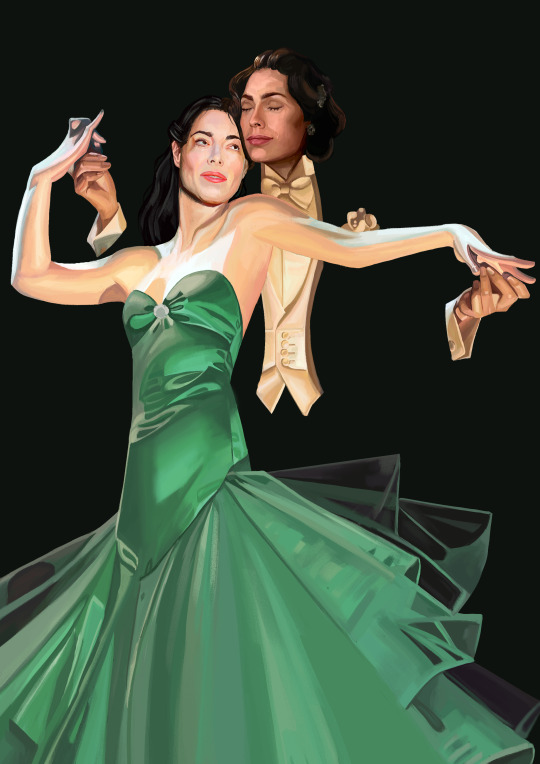 Art by the amazing @valerisalo over on Tumblr - isn't it gorgeous? ID: Leyendecker style art of Helena and Myka dancing; Helena is in front in a green dress, Myka behind her in a black tux and white tie. Helena looks up at Myka; Myka's eyes are closed and she's smiling slightly.