Written from a Tumblr request: Can you do an Eliot Spencer x Reader/Gf about where reader and Eliot have been dating for more than 6mos and has a nightmare so Eliot helps her back to sleep by playing with her hair and singing to her, and then she finally falls asleep on his chest?

Well this came out SUPER FRIGGING SQUISHY so I hope that’s what OP was after. Of course there are no gifs/pics of Eliot in bed (alas) so I’ve just put a smiley face in here for everyone to enjoy looking at. 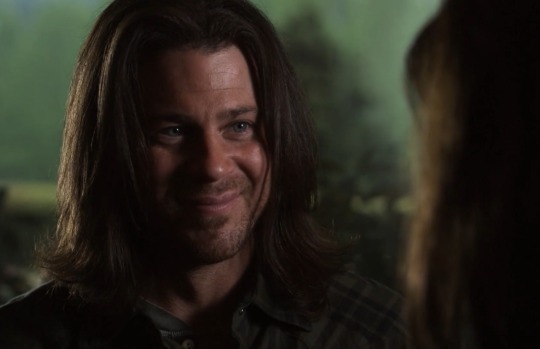 You wake up suddenly, sitting bolt upright a small gasp, and immediately feel like a first-class moron when it registers that you’re perfectly safe, in bed, in your comfy Miss Piggy PJs, at Eliot’s place. In fact given that he’s currently dozing right beside you there’s probably few places safer on the planet, up to and including the White House bunker or somewhere similar-

-scrap that, because he’s not dozing any more. In fact he’s sitting up too, and a warm, strong arm goes around your shoulders as he immediately goes from deeply asleep to firing on all cylinders in that irritatingly put-together way he’s always been able to do.

‘Nothing,’ you mutter, burying your face in your hands and adding a splash of guilt to the Idiot Soup recipe you’ve got brewing because you’ve woken him up, and he has an irregular sleeping pattern at the best of times. ‘I’m just being stupid.’

‘Stupid one,’ you grumble when he pulls you properly against his side. ‘Running, and being chased, and my legs not working properly, like I was running through jello or something… can’t even remember much else already.’

‘Still spooked you good,’ he observes. ‘You’re clammy, and shaking.’

‘Don’t gotta be sorry. Happens sometimes.’ He snorts. ‘All the times I’ve woken you up with bad dreams, about time you turned the tables on me.’

‘That’s different,’ you say, mildly appalled that he’d deem your silly moment to be anything remotely like the full-on night terrors he gets when his PTSD flares up. ‘And all the more reason I shouldn’t have woken you up when you were actually out-‘

‘Ssh.’ He kisses the side of your head and gives you another squeeze. ‘Still happens. You want anything?’

‘Funny.’ You can practically hear the roll of his eyes, but then he shifts and lays back down on his back, pulling you with him so you wind up sprawled over his chest. ‘No need to run anywhere, darlin. I got you.’

You sigh, fighting down the guilt because this feels nice, and even more so when he tucks one arm around you, palm on the small of your back, while the other hand comes up to stroke through your hair. Not that Eliot’s ever been lacking when it comes to physical affection, but he’s always more touchy-feely when the two of you are alone and this kind of snuggling is still pretty rare for him.

After a few moments of luxuriating in the caress you hear him start humming, which makes you smile into his shirt, and then you realise he’s actually started singing softly without pausing his motions on your hair or the soft circles he’s drawing on your back.

‘Remember when I was young and so were you, and time stood still and love was all we knew…’

You recognise the Alan Jackson and it makes your smile broaden, recalling the first time you’d manage to talk Eliot into playing his guitar for you when he’d casually admitted knowing most of the chords to one of your favourites.

‘…we lived and learned, life threw curves, there was joy, there was hurt…’

Not that you were ever likely to get the picket-fence type of traditional life the song went on about, but then you didn’t want it. You’d much rather have him.

Warm and safe in his arms, you let your eyes slide closed as irresistible lethargy creeps over you, banishing all remnants of the nasty dream that had given you such a start, and the last thing you can hear is what you’re sure is a smile in his voice as he holds you.

‘…we'll be glad, for all the life we've had, and we’ll remember when…’