Takes place shortly after Aliera e'Kieron returns, alive, from the Paths of the Dead. 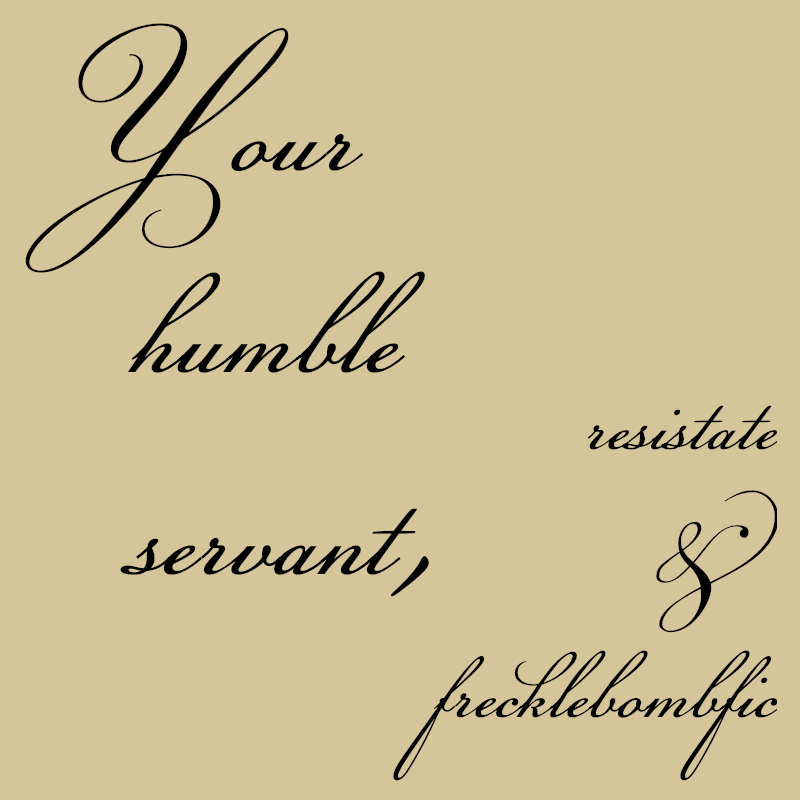 Note, penned in violet ink, discovered in the margins of a playbill for a Little Deathsgate Theatre production of ‘Fenario!’

Widely believed to have been sent by Morrolan e’Drien, then Duke of Southmoor, to Sethra Lavode, then Baroness of Dzur Mountain and Environs, during the reign of Zerika the Fourth.

Should you receive this note, and should it please you, I ask that you consider sending a sign at your earliest convenience.

Among other matters, I seem to have forgotten the ratio of gin to vermouth within—some variety of beverage which one may consume during the interval of any theatrical performance.

It is possible, too, that I have forgotten how to hold my liquour. Sorry.

Letter, penned in emerald ink, on the reverse of a page torn from the Imperial Library copy of  ‘A Treatise on the Proceedings to Be Adopted in Conducting or Opposing Codified Traditions in the Imperial Court,’ by Todd, House of the Tsalmoth, unknown edition (presumably published by Chreotha and Sons during Tortaalik’s reign).

I trust that my letter finds you on the World, and well.

Thank you so much for contacting me so promptly to confirm receipt of my note. It appears that you were indeed able to spare the time it took to reach out psionically, though I apologise if this was not the case. You did sound rather—preoccupied.

To be clear, I had previously sent a number of letters, all properly addressed and affixed with my seal, arms, and lineage; however, these letters were, without exception, returned unopened and unread.

Following this, I decided to draw on my Eastern heritage by sending a less formal ‘note,’ as I thought this approach perhaps more suitable to initiate correspondance regarding those matters which are not strictly a matter of life and death.

It was most kind of you to inquire, but I have no current need for instructions on how to best prepare a martini.

I must thank you again for the use of the library at Dzur Mountain. I spent a pleasant afternoon there recently, as I happened to be in the neighbourhood. Your servant, Tukko, informed me that you were occupied in protecting the World from those that wish us harm. He further informed me that you did not, at that time, require any assistance.

I trust that all remains stable, and that you remember that I am always at your service; as is Blackwand, my Great Weapon.

I look forward to hosting you again at Castle Black, at such time as this becomes tenable. I perhaps flatter myself that what my library lacks in number of volumes, it more than makes up for in comfort. The Empress has told me, several times, that it is one of her favourite places in the Empire. Moreover, I have recently taken delivery of two additional chesterfields of the softest darr-skin; and imported, at great expense, a number of hand-embroidered cushions from Greenaere.

I am considering barring guest access to the library, due to the tediousness of causing wine and blood stains to be constantly removed from the carpets. Aliera insists that I do not, however. She claims that she is learning as much about current Dragaeran society from those guests who make their way to my library, as from my books.

I have reminded her that I host guests 24 / 7, as the expression goes, and that Castle Black includes not one, but several, ballrooms; however, she prefers the relative solitude. I had thought that, having lost many of her circle in the events preceding the Interregnum, she would be eager to spend time in company, but this does not seem to be the case.

Naturally, you are welcome to make use of my library at any time, as are certain others of longstanding acquaintance.

I have acquired an advance review copy of a novel that may interest you. I will see if I can contrive to send it with Aliera. She speaks so very often and highly of the friendship you showed her in the days before her father caused Dragaera City to be destroyed.

If you should see my cousin, perhaps you could forward some small amount of words regarding what you take to be her state of mind. While it is true that her soul was separated from her physical body for length of time, not insignificant, all is again as it once was. Yet I wonder if there is perhaps more that I ought to consider.

Should you have the opportunity to reply, I enclose a self-addressed envelope. The envelope requires only that you affix your seal, etcetera, before entrusting your message to Her Majesty’s postal service.

Letter, penned in peacock ink, on a sheet of ruled paper, such as the kind still sold today, by the sheaf, to young Chreotha during the final days of the month of the Teckla.

I write to acknowledge receipt of your request, kindly relayed to myself by Lady Teldra, for various and sundry items. I am honoured to be of assistance. Several of the herbs I do not keep immediately to hand; however, I will shortly be able to procure the necessary quantities. I have reached out to a mutual acquaintance for assistance, as I believe he has some connections within his family.

On the matter of family, I confess that I am at a loss regarding how to best advise Aliera on matters concerning her duty to the Empire. I allude, naturally, to the fact that she has found herself to be Dragon Heir to the Throne. Now that it falls to Aliera, not myself, to assume the Throne whenever the Cycle should change, I have considerably more freedom to serve within the bounds of personal interest. For instance, I have resumed my study of military strategy in hopes of assuming the position of Warlord. Yet, Aliera does not seem to recognise her new position for the honour and privilege it clearly grants. Moreover, I fear that the matter may be unduly affecting her spirit.

I would appreciate any advice you might be able to spare my cousin regarding this matter.

Returning to the matter of witchcraft, I was unaware of your interest in this art. In addition to my considerable skill as a wizard, I am, as you may remember, a tolerably good witch. Do not hesitate to call on me, should you need my assistance in the defense of the Empire or, indeed, the World.

Aliera happened to mention, following her recent visit to Dzur Mountain, your query regarding modern vernacular. I agree that the Dragaeran day contains more than twenty-four hours and less than seven days, and, as such, I am at a loss to explain the currently popularity of the phrase in question. Perhaps it has travelled to us from one of the Eastern Kingdoms.

I look forward to hearing from you at your earliest convenience. I have enclosed, once again, a self-addressed envelope.

Letter, penned in blood, on a section of bark from the pink candlewood tree native to the Duchy of Southmoor.

I assure you once more that you were not disturbing me last evening when you reached out psionically. Sethra the Younger and I had just finished taking a turn around my principal ballroom, and there remained plenty of time, after we ourselves spoke, for me to quiz her about your military strategy during the Battle of the Tolling Bell.

I was pleased to find that though you are not well, you remain, at least, present. I have full confidence in your ability to continue to hold off our enemies. As well, I am grateful for your thoughts regarding the best uses we can make of our collective magical efforts.

My apologies, by the by, for the appearance of this letter. I have been working with a particular spell that may prove useful, and did not wish to take the time leave my tower merely to write a letter. I will send this off with Teldra when she inevitably takes pity on me and brings food.

I was able, earlier today, to make the acquaintance of Vlad’s grandfather. He grew up as I did, in the East, and has promised to have the herbs and other items you require when I return on Skyday.

I am to bring Aliera, for reasons that I confess are not entirely clear. Vlad’s grandfather has a cat, you see, and I found myself distracted. I believe, though I may be mistaken, that he is more familiar and less household pet. In any event, his name is Ambrus and he is quite large, with very soft, white fur. He enjoys hunting mice and trying to capture his own tail. I would swear to it that someone—perhaps a small child—was pulling at his tail at some point, though I did not actually see anyone.

I have had an opportunity to consider the points you made last night. I admit it is possible that I have not sufficiently considered the impact that Aliera’s time away from the World continues to make upon her spirit. I have not, I assure you, forgotten that I owe Aliera e’Kieron and Vladimir Taltis my life. However, as you well know, this debt remains a sensitive matter for us all, and I ask you, as my friend, and as Aliera’s friend, to continue to let us address this matter—or not, as the case may be—in our own way.

I would be remiss if I did not advise you that Aliera’s skill regarding a certain area of sorcery—one that ought to be of interest to our plans—will soon outpace even my own.

I will write again, with news of all that occurs here and in the Empire.

Letter, penned in silver ink, on the personalised black stationery well-known to be favoured by Morrolan e’Drien during much of his tenure as Duke of Southmoor.

Should you have felt any noticeable difference in the fabric of the universe earlier, say around the eighth hour after noon, this was certainly due to a number of humans and Easterners drinking to your continued health. It transpired that Vlad was waiting to meet Aliera and myself at his grandfather’s shop, along with a young Eastern woman with whom he has been spending a great of time, and plans were made to share a meal together. I believe that some fellow Vlad works closely with had been planning to join us, as well as an old friend of Aliera’s, but although there were sufficient chairs at the table, I did not catch a glimpse of either of them all evening.

The shop looked much the same as during my previous visit, save that Ambrus was tending to a litter of small cats, called kittens, which were related to him in some manner that I cannot now recall.

Vlad’s grandfather seemed doubtful that you would actually make use of the items I purchased on your behalf—you leave generous tips, by the by—but I assured him that you certainly would not put us both through this trouble for naught.

Still, should I be mistaken, I am certain that between us, my High Priestess and myself will be able, as the expression goes, to make ‘brandy’ out of wine.

Upon concluding our business at the shop, we removed ourselves to Valabar’s, where, I promise you, they will allow you to enjoy a seven-course meal at your leisure, even when accompanied by a tiny, fluffy, kitten. In any event, they will if you are Aliera e’Kieron.

(They will also, however, require full payment for any damage to the premises incurred by said kitten.)

Thank you, frecklebombfic, for enabling my nonsense <3

Morrolan_MS and xcziel as well as 1 guest left kudos on this work!