Survival of the Fittest

High school baseball boys procrastinating on studying with access to the internet. What will they do?

Slowly but surely, the study session is going awry at the Sakaeguchi household.

Abe, Mihashi, Tajima, and Sakaeguchi were seated around a low table, quietly laboring over the homework they weren’t be able to finish between classes and lunch break. It all started with the room pretty much silent except for the scratching of pencils, the unravelling of plastic as someone opened up a new packet of senbei, and the soft ticking of the wall clock.

At some point, Abe took it upon himself to help Mihashi with his calculus worksheet. Tajima then also requested assistance. Sakaeguchi, who was working on an essay for literature, continued to scrub his book for quotes that would support his thesis.

A handful of minutes passed. Abe was on his second explanation of the math problem, voice still low, but now punctuated with words of annoyance. Mihashi was nodding profusely, but he clearly didn’t understand a word. Tajima drank more tea.

Abe was on his third explanation. The impatient bounce of his knee was clearly audible. Tajima was balancing his pencil on his upper lip.

Sakaeguchi was still working, but in name only. He stared at the page, mind reduced to static, perceiving only the sounds in the room, which escalated like heat in a pressure cooker: The tap of a pencil against the tabletop, the thump thump thump of Abe’s leg hitting the table, the gears turning in Mihahi’s head, and the relentless ticking of the clock.

Finally, Tajima threw up his hands. “That’s it! We need a break!”

Mihashi’s forehead landed on the table with a thud.

Abe frowned deeply at Tajima, but then replied, “You’re probably right.” He stood up, stretched, and said, “Sakaeguchi, when is Hanai coming again?”

"Soon? He needed to help Momo-kan with a few things.”

Abe confirmed with a nod. “I’m going to the bathroom.”

Once Abe left, Sakaeguchi faced the other two. “How is math going?”

In contrast, Mihashi’s eyes started to well up with tears, so Sakaeguchi quickly changed the subject. “Ok! Uh, have you guys watched any movies recently?”

Mihashi shook his head. Tajima instead blurted out, “Not really, but I heard the new H*nger Games movie is coming out soon.”

Sakaeguchi’s face lit up with recognition. “That’s right! The first movie was pretty popular, wasn’t it? Wasn’t it scary!”

“It was cool! Like shuu -- pow!” Tajima mimicked the motion of letting an arrow fly, then an explosion.

“Maybe we should go see the other movie when it comes out? Mihashi, too!”

Mihashi looked happy to be included and nodded. “Y-yeah!”

Tajima whooped, clapping them both on the shoulder. “Nice! So when does it come out?”

“We can find out online,” Sakaeguchi said, gesturing at an ancient desktop computer in the corner of the room. As the computer whirred to life, Sakaeguchi explained that it previously belonged to a relative, but now served as the family’s desktop.

Tajima hummed, “Can we buy tickets, too?”

“Maybe. But I don’t have a credit card…”

Abe returned moments later, confused to see everyone crowded around the computer, “What are you guys looking at?”

“We want to see The H*nger Games,” Tajima informed him.

Abe raised an eyebrow. “The H*nger Games? B*ttle Royale is the original.” Nonetheless, he joined the rest to stare at the screen.

They quickly find that the movie wasn’t due to come out for a few months, but being in a distractable mood, they continued to scroll down the browser’s search results.

Sakaeguchi read what Tajima was pointing at, “H*nger Games… Simulator? What’s that?”

Sakaeguchi clicked the link, “I think it’s a game.” He clicked around until he reached a new page with lots of empty boxes. “Oh, I think I get it. You’re supposed to put names and pictures in here.”

Abe seemed skeptical. “Of anything?”

“I think preferably people or characters.”

Then, Tajima grinned, “Hey, we should do it with our team.”

The other three fell silent for a moment. Then Abe said, “I think we should get back to work.”

However, Sakaeguchi seemed convinced. “I actually think it would be pretty funny.”

Tajima slapped Sakaeguchi on the back, “Sakaeguchi gets it! C’mon, just once!”

Tajima and Sakaeguchi took that response as tacit permission to start loading the page with the names of faces of their teammates, then those of other teams once they ran out.

“Nah, they would be too strong! It would be unfair.”)

At long last, with contributions from everyone, the simulation “Koushien 20XX” was ready to roll. 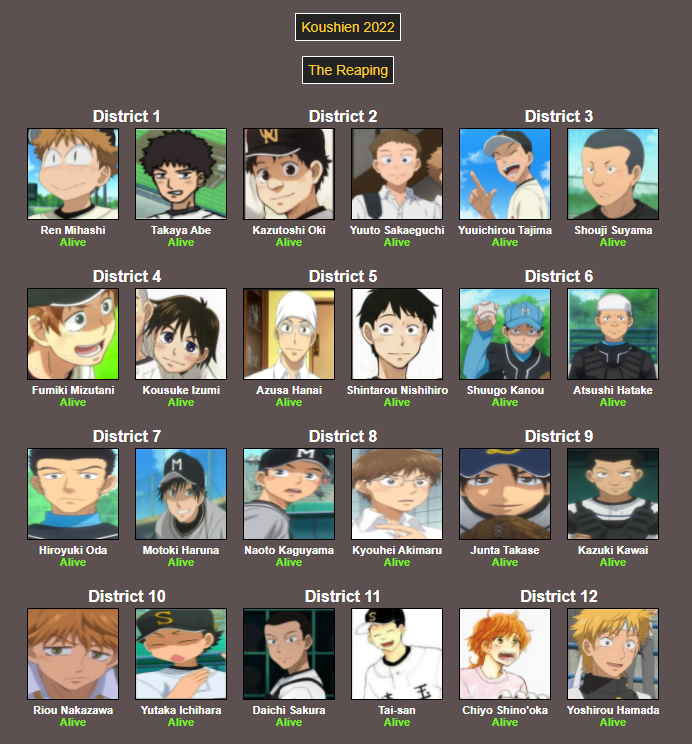 “Are you sure that’s it?” Abe said, eying the screen. “I don’t see how this can be a realistic simulation with just names and faces.”

Sakaeguchi shrugged, “I heard computers are pretty smart these days.”

Tajima chimed in, “Have you heard of D*ath Note?”

“Argh, whatever, let’s get on with it already!”

Sakaeguchi didn’t need Abe to tell him twice. With a wary mouse click, Sakaeguchi hit “start”, and the bloodbath began…

Tajima: “No fair! Why does Daichi get a sword?! My character ran…”

Abe: “It doesn’t really matter if he doesn’t have the skill to use it.”

Abe: “There’s nothing related to swordplay or combat in his background.”

Sakaeguchi: “I still think Daichi would look very impressive with a sword.”

At the sight of Hatake, and Nishihiro’s fate, visible shivers crawled up along Mihashi’s sides. Even the hairs on his head stuck up on end.

Tajima: We will avenge him, strictly!

Sakaeguchi: “It seems that Kawai-san is actually a very caring senpai.” 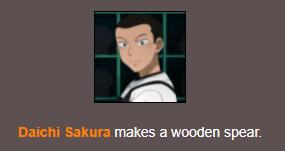 Abe, squinting: “How is the game deciding these things?”

Everyone in the room turned to look at Mihashi, who was shocked stiff. Abe also seemed beside himself.

Tajima pat him on the back: “I’m sure you were just doing what you had to do.”

Sakaeguchi nodded in agreement: “You took out two strong opponents after all.”

Abe: “…You do know that there can only be one survivor, right?”

Tajima: “But in the movie there were two!”

Sakaeguchi: “Tousei is scary no matter how you look at it.”

Tajima: “Damn, I want to play them again!”

Abe: "There has to be a limit to what he can carry, right? Sakaeguchi, is there an inventory menu or something? Or some kind of hacking?”

Sakaeguchi: “Don’t look at me! I didn’t design this game!”

Abe: “There is no way I was killed by a catcher with such a boring lead!”

Sakaeguchi: “Maybe the order doesn’t indicate who killed who? So maybe the culprit of Abe’s death was… Hanai?”

Abe was glaring daggers at the screen.

Abe: “Tch. Don’t be fooled. Don’t forget this is a survival game. He must have some ulterior motive.”

Sakaeguchi: “Remember, this is a pretty random AI…”

Abe: “Somehow… this is very disturbing.”

Sakaeguchi: “I wouldn’t know what to do with this thing??”

Tajima: “No fair! I never got a weapon!”

Sakaeguchi: “I wonder how many more he’s going to get at this rate.”

Tajima: “Yeah, and besides, you and Mihashi hold hands all the time during practice, anyway.”

Tajima: “WHY DID YOU KILL HANAI?!”

Abe: “Maybe you deemed him more of a threat.”

Tajima: “Maybe this is a reflection of Sakaeguchi’s inner feelings towards Hanai?”

Sakaeguchi: “… I’m kind of glad that Hanai isn’t around to see this.”

Tajima: “We were so close to avenging Nishihiro, too.”

Abe: “In that case, the superior catcher won out.”

Sakaeguchi: “I don’t know how I feel about owing a favor to Tousei’s catcher though.”

Abe: “How could you do something so stupid?”

Abe: “How is that bastard still alive, anyhow? That musclehead shouldn’t be smart enough to survive.”

Tajima: “Suyama, too good for this world.”

Sakaeguchi: “Am I… the only person still alive from our team?”

Abe counted on his fingers: “Yeah, I think so.”

Sakaeguchi: “Ah, so much for that? Ahaha.”

Tajima: “Don’t mind! You still made it the furthest of all of us!”

Sakaeguchi: “I know this is fake, but it doesn’t feel very nice!”

Sakaeguchi: “That’s a lot of people.”

Tajima: “There’s only one more!” 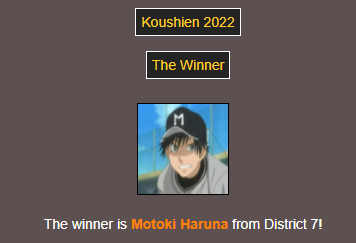 Sakaeguchi: “It’s a bad day to be a catcher for Tousei.”

Abe took a step back from the computer. “I can’t accept this. The probability of this was…” Abe was clearly having a hard time wrapping his head around this outcome because visibly he winced.

Tajima swallowed down a laugh. “It doesn’t really matter, doesn’t it? Maybe it’s all random, like Sakaeguchi said. But your reaction…!”

Abe continued to glare at the computer screen as if it had personally betrayed him. “I want a rematch.” He turned to Sakaeguchi. “Let’s do it again!”

Sakaeguchi shook his head. “I-I think we should get back to studying.”

Before they knew it, Mihashi, Abe, and Tajima were all scampering around the room. An eraser hit Abe in the forehead, who retaliated by beaning everyone with rice crackers –

Suddenly, the sliding door opened. Everyone froze. Standing squarely in the doorway, sweat beading his shaved head, was Hanai.

He gazed upon the scene: Everything everywhere. Tajima was using a floor cushion to defend against Abe. Mihashi was halfway in the closet, Sakaeguchi remained dumbstruck in his swivel chair in front of the computer, which had a blurry picture of Musashino’s ace pitcher at the center of the screen.

Hanai took a deep breath – prayed that his hairline wouldn’t recede for another year.

Before he could think of words of reprimand, Tajima snickered. Everyone stared.

“Sorry,” he said, “I was just remembering how Sakaeguchi killed you with an ax.”

Hanai blustered, “Sakaeguchi did what?!”

And henceforth the H*nger Games Simulator, with the approval of both vice captains, was banned from the Nishiura baseball club, ad infinitum.

Hey there, thanks for making it to the end! As you may have guessed, this fic is based off of a session of the Hunger Games Simulator my friends and I ran on a whim - so this is all quite niche, but I hope you, the reader, were able to derive some joy from this. Maybe even have a good laugh.

Major shoutouts to MasterLillyclaw, to whom this fic is dedicated to, but also gave me everything I needed to know to format the images properly. <3