Helena tries to soften parts of a painful past and build happy memories and a future, along with Myka.

DISCLAIMER: Warehouse 13 is owned by the Syfy network and executive produced by Jack Kenny and David Simkins. New Memories is a non-profit fan work.

ATTENTION: I DON'T ALLOW the modification, adaptation or translation of this story, as well as the publication or republication of it on third party websites or profiles.

NOTE: I don't have a beta reader and English is not my native language. No matter how hard I try, something can go unnoticed, so please be kind and constructive when pointing out any mistakes.

*** OLD FANFIC posted years ago under my former pseudonym DANIELI HAUTEQUEST, and which I now intend to continue the idea through a series of short stories. ***

[Fanfic published on AO3 and Wattpad]

“You know what? Maybe I used the wrong incentive.

Now, with somebody in the chair you care about…

Maybe your memory will come back.”

"We cannot change the past, but we can change how it affects us..." 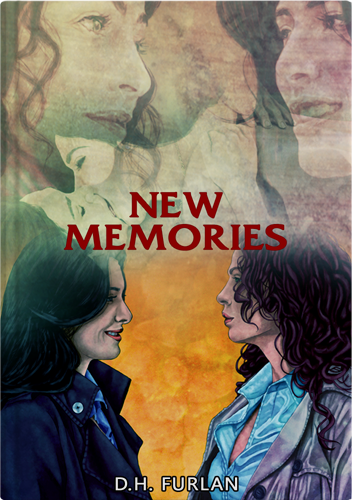 If you want to see the arts I made and used on the cover:

Two days away from home.

After the long period of forced separation due to Helena's mission with the Astrolabe, for Myka, any time away from her was painful and unnerving. She still had not shaken her fear of losing Helena, once again.

Myka looked questioningly at Claudia, who, hugging Steve, was joking with Pete about some nonsense. The young agent and Helena had stayed to improve the Warehouse's power generators. Helena's idea, modernized by Claudia, and after a little struggle, approved by Artie.

“We arrived just now. HG must be in the shower,” Claudia answered the silent question.

Myka smiled with a nod of thanks, and ran upstairs. Despite her tiredness, she took the stairs two at a time. Upon reaching her goal, however, she paused and took a deep breath, trying to contain her excitement a little. Myka did not want to scare Helena with her sudden appearance, despite suspecting that the woman had heard the racket, coming from downstairs.

Though, as soon as she entered the bedroom, Myka found herself surprised.

She dropped her duffel bag to the floor with a thud, her lips pursed as she stared, in a mixture of wonder and apprehension, at the beautiful work of art by the window.

Now intrigued, she walked slowly to the old chess table. Hesitantly, she ran her fingertips over the polished wooden surface and admired the details of the bronze pieces.

“Hello, darling,” Myka heard the melodious and sweet British voice, while arms wrapped around her waist from behind. Helena kissed her neck, and smiled, feeling her girlfriend's body lean more against hers.

Myka turned around in her embrace, facing the older woman.

“Hey...” She smiled warmly, touching her lips to Helena's so gently, as if she was afraid of breaking her.

Helena immediately responded to the contact, with a little more pressure, asking for entry into the mouth that always took her breath away and aroused delicious desires in her. She smiled internally, hearing Myka's little moan, as the tastes and hot tongues met, and reminded her girlfriend that she was really there, and was not going anywhere.

After a few more kisses and caresses, when Helena felt Myka finally more relaxed, still hugging, both turned to the table.

“I used my current good relationship with the regents and made a request,” Helena said jokingly. “Since the table wasn't in my museum in London…” She shrugged.

The two were silent for a while, until Helena turned to Myka again and wrapped her arms around the younger woman's neck.

“Why did you do that?” asked Myka, her voice and eyes revealing the turmoil of her emotions. The game brought back powerful memories. The good ones, sadly, suffocated by loss and grief.

“We cannot change the past, but we can change how it affects us...You taught me that...”

Not caring about the tears that were already clouding her eyes, with a watery smile, Myka nodded in agreement.

Helena smiled sweetly in response, and kissed the wet path on the taller woman's face.

They looked at each other, once more, the intensity in their eyes, significant. Love and healing.

Finally, after a long time, the joke did not sound bittersweet.