Tales From The Marvelous World: "The Guardians of Farscape"

What starts as an emergency rescue mission becomes a quest to protect an endangered species and a powerful, interdimensional crystal. And who else to leave the fate of the galaxy than in the hands of a bunch of ragtag heroes like the Guardians of the Galaxy and the Moya crew? Piece of cake, right? Well, it will be once the two teams get control over Thor, the God of Thunder, who is on his own quest...for love! Set along to a rockin' series of tunes from "Peter and John's Awesome Mix Vol. 1," this is THE GUARDIANS OF FARSCAPE! 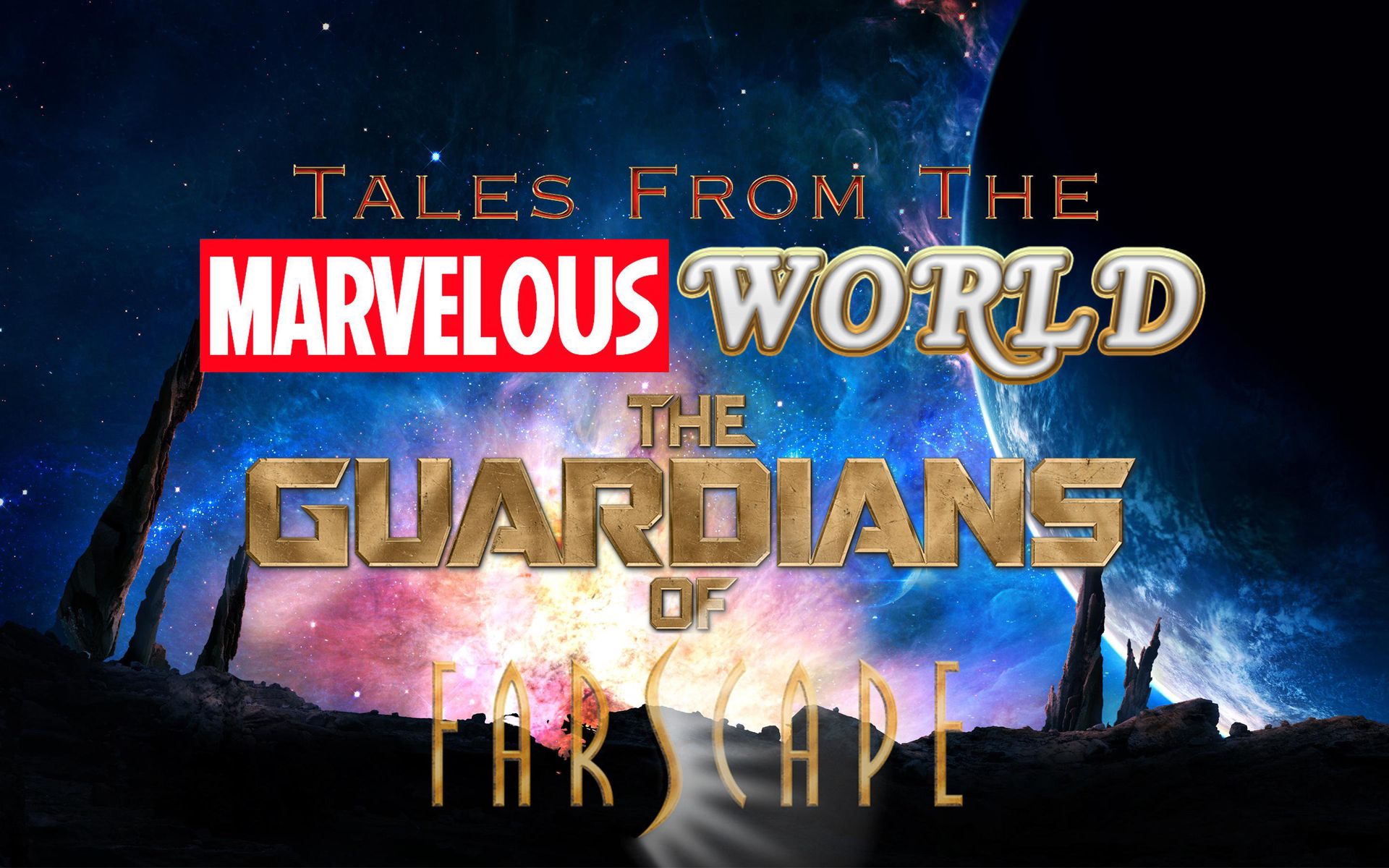 Although there was much peace through the galaxy in the wake of Thanos’ demise, there was still trouble to be found around. That’s what kept the Guardians of the Galaxy and the Moya crew busy in their newly-formed alliance. One distress call after another sidelined their primary objective: getting Gamora out of stasis and to the planet Videx – home of a race capable of transferring and restoring lost memories. But they had to uphold to their heroic code, with one Podling and one God of Thunder in tow.

Lately, the God of Thunder had been a bit of a problem.

In spite of the fact that Thor got himself back into “God Bod” form, not only was he upstaging the Guardians and the Moyans in battle, but he also did more damage than the adversaries they faced. Indigarr was the last straw. While Thor did singlehandedly vanquish Habooska the Horrible and his gang of Booskans, he also singlehandedly demolished the Indigarrians’ sacred crystal temple in doing so.

“We gotta get rid of ‘im!” Rocket demanded in an emergency meeting held on Moya’s bridge, outside Thor’s knowledge.

Crichton quickly stepped in. “Now, let’s think about this, for a sec. Do we really want to let the big guy go? He does have that handy axe of his that’s gotten us out of a few scrapes.”

“Yeah, and it’s also gotten us into a few of them,” Aeryn countered.

“Thor needs to go, Crichton,” D’Argo insisted. “I’m with the vermin on this one.”

“What about Hup?” Mantis sympathetically inquired. “He hasn’t done anything wrong.”

“Hup is the last of his species and deserves sanctuary – he can stay,” Zhaan approved, though it may have seemed a little biased from her, as she was also part of an endangered species.

“But Thor has to go,” Nebula made her vote.

Peter Quill sighed, hating to be placed in such a position. “So, is it unanimous? On our next stop, we officially kick Thor off the team. Anyone oppose?” Crichton wanted to oppose, but he didn’t see much good in it with all the others having made up their minds; and he was in no mood to play the role of Henry Fonda in 12 Angry Men.

Unbeknownst to the Guardians and the Moyans, Thor had been listening in on their discussion about him, from near the bridge entrance. Heartbroken and discouraged to know his own teammates thought of him as a nuisance, he retreated to Moya’s docking bay and sat inside the Benatar to drown out his sorrows by watching Earth to Ned – a late-night talk show hosted by two aliens, Ned and Cornelius, somewhere within the center of the Earth.

Thor’s only company was Hup, who sensed the God of Thunder’s despair.

“I’m not wanted here, Hup,” Thor lamented to the Podling. “Perhaps it’s for the best. All this never-ending fighting and adventuring. Is that all that I am now?” Hup said something in his Podling language that Thor wasn’t quite able to discern. “We really should get Pilot to fit you with some translator microbes.”

Ironically, just as Thor mentioned Pilot, the Moya pilot himself patched in through the Benatar’s video transmission systems and projected his wide crest-shaped head, replacing Ned. “Thor,” he called, “are the others with you?”

“Well, maybe you can relay this distress call to them. It’s come from Knowhere.”

“It’s got to come from somewhere, Pilot.”

“No, it’s come from Knowhere – the place – specifically the museum of Taneleer Tivan.”

“That’s the one. Will you alert the others of this?”

Thor deeply considered this new mission put upon the Guardians and the Moyans. Of course, he could alert them of it, at the risk of being kicked off the team afterwards when they succeeded. Or he could do the opposite: take on the assignment himself and prove his worth.

Click! Thor pressed a button on the holo-console that ended the call.

Reaching out his arm, he called on Stormbreaker (his axe) and instantaneously suited into his Asgardian armor. Hup looked on him in awe mixed with intimidation, seeing the lightning streak all over his shiny gold-and-blue armor. “How ‘bout it, Hup?” Thor invited the Podling. “Let’s be Asgardians of the Galaxy ourselves!”

Hup let out a mighty cheer, briskly waving his spoon in the air.

“That’s the spirit! Now, we’re going to need a ship. We obviously can’t take the Benatar, not without pissing off the Guardians more. And Moya’s much too big for us to take – beside the fact that only Pilot can fly it.”

He then remembered one small insignificant ship docked along with the Benatar inside the bay, passing by it on his way in. Rushing out along with Hup, they approached the ship – a space module from Earth that looked fairly primitive among more advanced ships like Moya and the Benatar; yet it was modified extensively with organic parts from Moya. It also was a two-seater, perfect for himself and his Podling comrade.

Together, they used the module to leave Moya and fly to Knowhere.

Not a minute after their departure did Pilot alert the others.

“HE DID WHAT?!?!” Crichton and Quill bellowed in unison.

“It was just like he said – he’ll handle it himself,” Pilot informed. “And he took Farscape-1.”

“He goes rogue and steals my ship?!” Crichton roared. “And here I was, ready to stick my neck out for the guy!”

“Had you stuck it out, Crichton, you would have given Thor the perfect opening to cut off your head,” Drax stated.

“Not helping!” Crichton scolded the Destroyer.

“That’s right – you were gone in those five years that he renovated it into an eighty-story complex,” Pilot detailed. “It holds ten times as many of his collections now.”

“Well, if there’s anyplace Thor can go to do some damage, it’s there,” Rocket ratified. “And it takes care of our problem getting rid of him. Two birds, one stone.”

“I do not see how birds and a stone has anything to do with this,” Drax said.

“Rocket, did you forget that Knowhere is now under Peacekeeper jurisdiction?” Aeryn jogged the raccoon’s memory. “If Thor goes in and busts the place up, that’s going to bring the heat back onto us, and we’ll be right back where we started with them before the wars!”

Rocket shrugged. “Well, when you put it that way…let’s go find that big, dumb bastard.”

The severed head of a Celestial, colonized by the Tivan Group to mine organic skull matter, Knowhere was still under renovation, following Thanos’ attack, five years prior. As such, mining operations shut down, leaving an instability in management. The Collector was more preoccupied with rebuilding his museum than he was presiding over the territory.

Thor had no trouble landing Farscape-1 on the dock closest to the museum. He kicked his way through the front doors, Stormbreaker gripped firmly in one hand, while Hup brought up the rear with his spoon. Both surveyed the mass assortment of glass containment cells that were suspended along all eighty levels of the museum, holding a plethora of beings, items, weapons, etc. that the Collector considered as “specimens.”

Normally, a Krylorian female would welcome any visitors to the museum and introduce the Collector. Unfortunately, Tivan lost access to the Krylorians, shortly after the Peacekeepers restricted enslavement of their race. Therefore, Tivan was forced to abandon whatever activity he partook in and rush to welcome the visitors himself. “Welcome, dear spectators, to the Taneleer Tivan Museum,” he greeted. “I am your humbled host, Taneleer…”

Soon as the Collector realized who his latest guest was, he was spellbound. “The God of Thunder? To what do I owe the pleasure of being visited by the Son of Odin and Earth’s Mightiest Avenger?”

Flattered as he was by Tivan citing him as “Earth’s Mightiest Avenger,” Thor did his best to focus on the task at hand. “We received a distress call from this location. Was it you?”

Tivan shook his head. “I am not distressed.” His sights then set on Thor’s diminutive companion with the spoon. “Is that…a Podling?”

“Hup!” the Podling introduced himself.

“My friend is not for sale, Collector,” Thor rebuffed. “If you didn’t give the distress call, then who did?”

“Perhaps it was a false alarm or a ‘butt dial,’ as the Terrans say.”

“Then you wouldn’t mind if we look for the butt that made that dial, would you?”

Tivan permitted them to investigate.

Thor knew it would take forever to search the entire complex, with as many levels as there was. He began to rethink not involving the Guardians or the Moyans in this mission, as he and Hup happened on one room with a specific item that caught the God of Thunder’s eye: a reassembled Mjølnir!

The last he saw of Mjølnir was shortly after Hela shattered it in Norway.

“Tivan!” he bitterly shouted. “Where did you get…?” His inquiry was cut short as soon as a putrid odor filled the room. He only realized all too late that knockout gas was being vented in. Hup, smaller and closer to the vents, was knocked out cold long before Thor succumbed to the gas’s effects.

“My apologies, God of Thunder,” he heard Tivan’s voice over the room’s speakers. “The galaxy is indebted to you for ridding it of the Mad Titan, Thanos. But I cannot allow you to leave this museum with my most prized possession.”

towardbrevity and Ulterion as well as 1 guest left kudos on this work!