bear with me here

Ryfar finds himself in a bit of a pickle. His Wolf might just be able to kiss it better.

Or: Ryfar and Erim are snarky bastards, but they love each other very much. 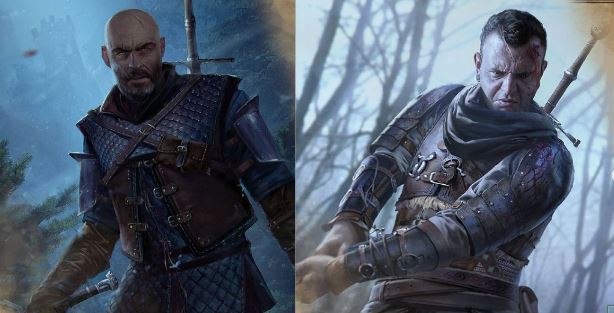 Erim stared down at Ryfar. The witcher - flat on his back, blood in his widow’s peak, one thick arboreous vine sticking out of his shoulder; quite a sight - looked back with a cocky twist of his lips. Despite the circumstances of their meeting, Erim found it infuriatingly endearing.

He rolled his eyes and unbuckled a Swallow from his breast pocket. “What have I told you about not jumping cock-first into battle?”

Ryfar wheezed a little as the Wolf pushed him back on the ground even more, pinning him with his weight. Erim was lighter than him, true, but his dense musculature and added armour wasn’t anything to sneeze at. “Should I have pirouetted as my entry? Made a somersault? All that dancing around is not for me. And besides,” Ryfar sniffed a little, dramatics turned up,” you should see the other guy.”

Erim raised a singular bushy eyebrow that had no chance of hiding in his non-existent hairline and scrunched his nose at the *other guy* not ten feet from them. “What gave you the brilliant thought to take on a fuckin’ leshen without your potions?”

“I’m out of celandine,” Ryfar muttered, then muffled a high-pitched scream when Erim decided to yank out the vine and pour half of the Swallow into the open wound in one go.

He felt cool, calloused hands wiping away the blood and sweat from his brow, down his temple. When Ryfar opened his eyes through the pulsing pain, Erim was close, bald head pressing against his own forehead.

“Idiot,” he murmured, but he took the bite out of his words with a press of his lips. Ryfar bit him in retaliation, just enough to draw blood and a growl from the Wolf’s chest.

“Has anyone ever told you how charming you are?” he asked rhetorically, and gestured to his injured, slightly sizzling shoulder incredulously.

“All the damn time,” Erim assured, a smirk hiding in the shadow of his beard. “I can be quite charismatic; it is known.”

“Vesemir’s opinion doesn’t count.” With a dismissive snort Ryfar bucked his hips which the Wolf easily rolled with. Ryfar groaned. “Get off me, you oaf, you’re heavy.”

“That’s not what you said last summer, Rifi.”

Knowing when he was fucked with, the Bear pinned his lover with an unimpressed gaze. “Erim?”

“I’m not fucking you injured, in the forest, next to a leshen corpse.” He counted his points on his fingers, each one poked into Erim’s abdomen. “I have standards.”

Erim sighed, playful and lazy, something he only allowed to be in present company, and rolled off to the side. “Then let me offer up my room as tribute.”

He pushed the remaining Swallow into Ryfar’s hand, and as he helped him to his feet, he drew him into a proper kiss, breathing in deeply the scent of leather, sweat, and citrus. It felt like a second homecoming.

Dedicated to the Cake Shop, because they all rock. Love y'all!
Erim is the wolf witcher found in the freshly kickstarted Witcher: Old World Tabletop game
Ryfar is the bear witcher for it, but his portrait could be familiar from Gwent too ;) His line: "All that dancing around is not for me." was ripped from it.
This was a randomly generated pairing, but y'know what? I think they fit.

Find me on tumblr as Hungarianbee.
And as always kudos and comments are appreciated!