Bury My Soul Deep Within the Waters

It was raining when Mary died.

This is my own take on the "In Water" ending. 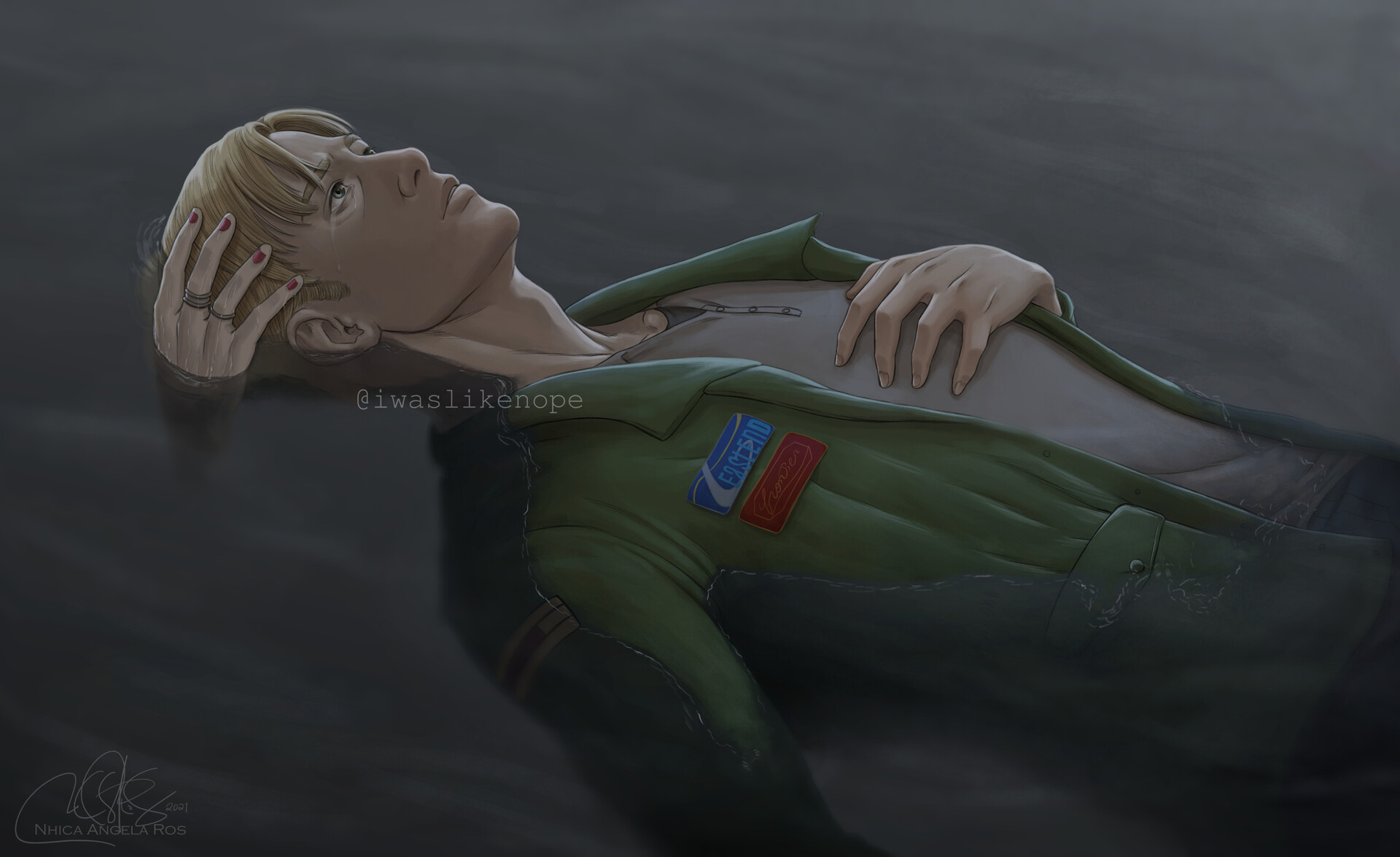 It was raining when Mary died.

Years before, James found comfort in the rain. It had always been a delightful experience to him — driving for hours, listening to the soft drumming on the windshield, watching as the world around him was cleansed by nature. Mary loved the rain too, and during the very early stages of their relationship, he’d take her to different places to admire the effects the rain had brought. There was something magical about it. Romantic, Mary had once claimed. It had even come to the point of Mary begging James to drive the two of them out of town whenever it rained, and he was only too happy to do so.

It was different now, however. There was only pain every time he heard the rain. It brought him nothing but sadness and misery, and since he lost the ability to cry, the rain did it for him. He supposed it was only fitting that he face his punishment head-on with a reminder of how he ended Mary’s life on such a somber day.

One last kiss, one last caress of her face before telling himself it was over, the rain hitting the windows as he pulled the pillow from underneath her, smothering her until her body went limp —

He’d watched the colors of life fade from her face, steadily, neither tear nor scream escaping his eyes and lips. But there was that same emptiness. It never left him. It only grew worse.

James turned his head up and exited the room where the two executioners stood, spears through their pyramid-shaped heads, the weapons the only things holding them upright. They were no longer a threat.

The sound lingered with every step he took. The entire corridor was damp, dirty, smudged with age and death. There was dripping everywhere. The whole place smelled rotten — smelled of decay. It smelled like their room when Mary died, as if reached, and tainted, by her sickness.

James’s fingers were numb as he cradled the rifle in his arms. The leaks from the ceiling dripped down his hair, down the side of his face, making him look like he was in tears. He could not feel a thing. He could only walk on without pause, waiting for the end to come, marching towards what could ultimately lead to his death.

Death. How he wondered, always, what it felt like; what images they bring once the light starts fading before you. It was always something that nagged his mind ever since Mary’s diagnosis. He had lain on bed, stared up at the ceiling, pictured multiple possibilities, only to end up with more questions.

Mary’s death was not quick. It was not painless, either. The illness tortured her for three years straight, and during those dreadful, dreadful years, James had already deemed her gone from this life. He was the first one to give up.

Surely, it must have been hard, being unable to breathe? There was also the fact that your own husband was trying to kill you — what utter shock, panic, and anger she must have felt at the time before her breathing ceased. James always feared drowning. It must’ve felt like drowning to Mary.

Was drowning painful? He deserved it, too.

The corridor was coming to an end. The dark door loomed feet from him, taunting, teasing, waiting for him to come and accept his twisted fate.

Come, James.
We’ve been waiting for you.
In your special place —
Where you deserve to be punished.

James was about to press on when voices began to echo through the walls. He paused, looking around for the source of the noise. There were no speakers on sight, but he didn’t wonder how this came to be. This wasn’t how this town worked, he realized long ago. He stood still anyway, listening.

“Mary?” It was James’s own voice. It sounded faded, like a forgotten memory.

“What do you want, James?” said Mary’s voice. There was venom in it. James remembered when this conversation took place.

It was a few days before the doctors agreed to let her go home, for one last time.

“Look! I’m disgusting . I don’t deserve flowers! Between the drugs and the disease — I look like a monster.” A heaved sigh. “What are you looking at? Get the hell out of here! Leave me alone already! I’m no use to anyone. I’ll be dead soon, anyway. Maybe today, maybe tomorrow . . . it’d be easier if they’d just kill me.

“But I guess the hospital is making a nice profit off me. They want to keep me alive . . .

James gulped. His grip on the rifle slackened. How the memory stung — he never thought twice, never looked back, wanted to run from Mary as far away as possible —

Being with her killed him. Every time he visited her, it was always the same thing; she got angry, always lashed out at him like everything was his fault, like he was the source of her illness, and he was forced to stay for another hour to try to comfort her with lies, knowing full well both of them did not even believe in the future anymore.

James had resumed his slow march towards the end of the corridor, but then found himself stopping one more time, as he‘d done back at the hospital.

James shuddered. He stood there staring at the taunting door, waiting for the outburst, any sign of something that was finally going to end him. Nothing came.

He must walk on, open that door like he did when Mary begged, leaving their relationship forever shattered.

And open that door he did.

It was still raining as he pulled the trigger one last time. Maria fell limp on the floor with open eyes, staring up at him, reminding him of Mary when the realization hit her a little too late. Her lips were parted. The only difference between them was that Maria looked absolutely monstrous, her limbs tied to a rusted bed frame and her torso bathed in blood.

She was truly dead this time. No more apparitions. It was over.

James lowered the rifle, taking deep breaths. He looked around and found a door at the end of the wide room. It wasn’t there before, but he knew better than to question that. It could be the only way out.

He released his grip on the rifle, letting it fall with a clumsy clang on the rusted floor. He didn’t need it anymore.

He approached the door and opened it slowly. It did not lead him back to the damp corridors of the hotel. Instead, he was standing within a dark room that looked oddly familiar, the only source of light coming from the single window to his left which pooled down the bed where a frail-looking figure lay. There was that same chair facing the bed — James recognized it as the one he would rest on when Mary spent her last days with him.

This was their bedroom.

And there she lay, wearing the same pair of pajamas she had worn on that fateful day.

James immediately sat on the chair and took her hand. She opened her eyes, looked up at him and smiled — a weak smile, but it was still Mary’s nonetheless. It brightened upon seeing James’s face.

“Mary,” James breathed, wanting to hold her hand tight but afraid to inflict more pain. His eyes began to water.

“James,” she whispered. She caressed his knuckles with her thumb, letting the silence stretch on over them as they stared at each other, admiring one another’s face.

But then Mary coughed.

“That’s why I did it, honey. I just couldn’t watch you suffer.” James watched as Mary continued coughing. A stabbing pain made his breath hitch — watching her like this was all too familiar. Too familiar to warrant recalling.

“You killed me and you’re suffering for it,” Mary said. “It’s enough, James.”

James lowered his head, shaking. The tears fell from his eyes, dropping on their intertwined hands.

If he could only take it all back —

Mary threw into another fitful coughing. She turned away from him, covering her free hand to her mouth, trying to muffle the sounds. James gritted his teeth, hopeless and helpless, unable to do anything else but watch.

“Mary,” he muttered under his breath, leaning in close to hold her shoulders.

Mary looked back at him, her eyes widening, still coughing and quivering. She reached out to touch the side of his face, and James pressed it against his cheek, the tears streaming through their fingers.

No, he thought. Please. No. Not again.

“James —” Mary gasped. She breathed out for one last time, spasmed, and stared back at him with glassy eyes. She remained still.

James sat there, watching in the silence, his wife’s hand pressed against the side of his face. He released it so very slowly, as if afraid of breaking her bones, and glanced up at the single window at the head of the bed, listening to the soft rain still falling outside. More tears fell from his eyes.

He never cried when he killed her. He was unable to shed a single tear when he saw the videotape. He’d been so full of pain and self-hatred he had forgotten what it felt like to cry, to express just how lost he was.

His body quaked as the sobs broke out of his lips. He buried his face in his hands and cried, letting everything out.

Outside, the skies cleared. The fog had dissipated. The rain stopped.

He had arrived at the end, at last.

James gently laid Mary on the passenger’s seat and secured the seat belt around her. He studied her face. Pale, sickly, but somehow still beautiful — a ghost of her former self. He shut the door and climbed into the driver’s seat, staring ahead, analyzing the deceitful peace blanketing the town. The fog disappeared, and once more it looked like the quiet resort it was supposed to be.

Now he understood. He remembered.

He now knew why he came to this town.

James started the engine, reversed out of the observation deck, and drove towards the shore of the lake.

What had he been afraid of?

Without Mary, he had nothing.

James tapped his fingers on the steering wheel and stole a glance at Mary’s corpse. Her head lolled to the side, her mouth opened an inch. James wiped his thumb on her blue lips and smiled.

He drove on ahead. Never stopping, never pausing. James closed his eyes, a hand on Mary’s cold one, and whispered her name on his lips.

Now, they can be together.

Artwork featured above is my very own fanart called "Deep Waters" as a tribute to Silent Hill 2 soon after I finished the game. I know it does not relate to this fic, but the art's basically my summary of the game lol. You can find the process shots here!

P.S. I actually unlocked the "Leave" ending but I wanted to explore the heavy themes of the game through "In Water". I'd love to unlock this ending next.