Doctor Who and the Marvelous Muppets 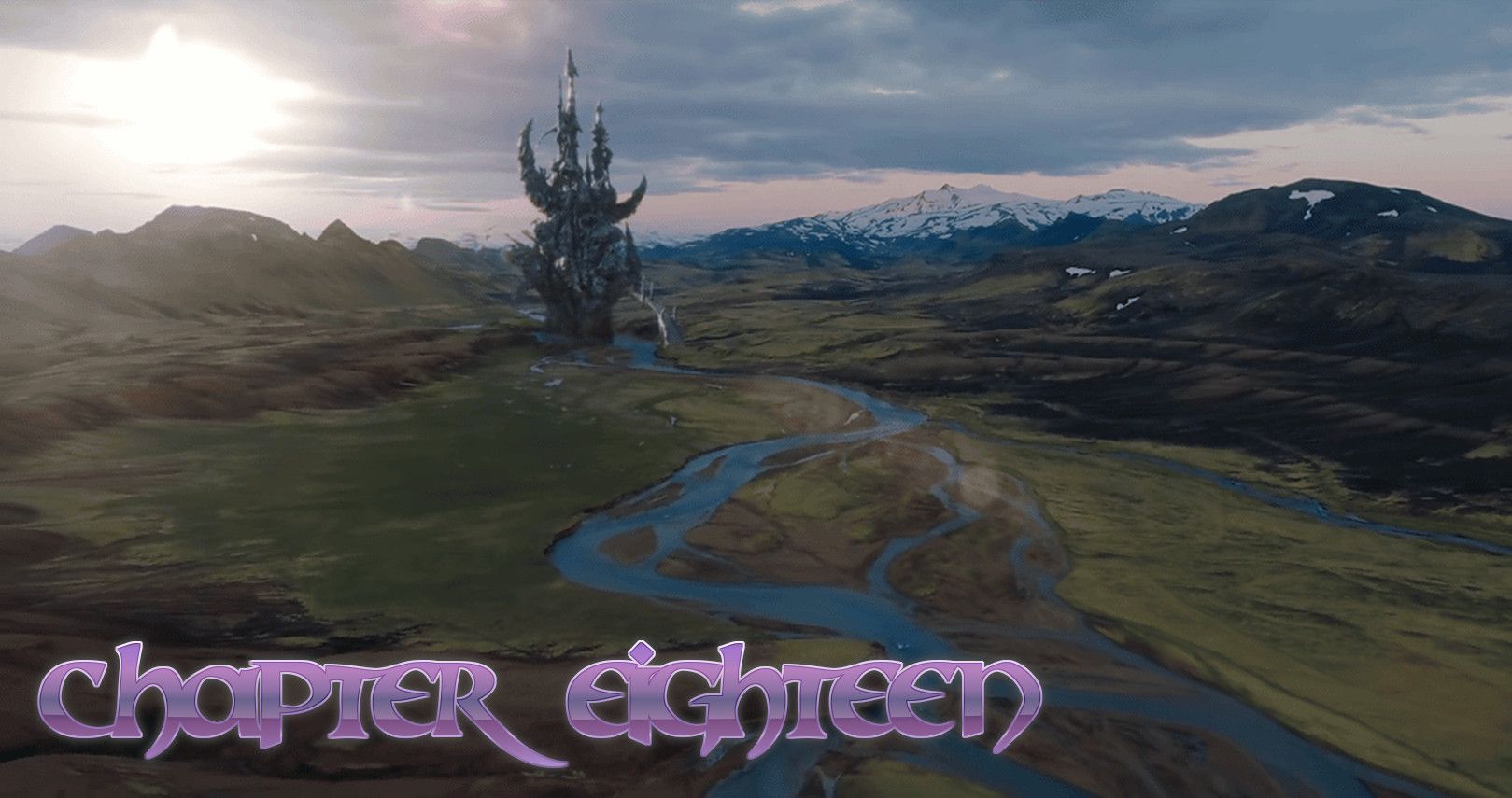 Years ago, Gonzo learned that he was an alien from the cosmic superhero the universe knew as “Captain Marvel.” Of course, he knew her by her Earth-born name, Carol Danvers, when Carol herself discovered that she was Terran. Ever since then, Gonzo had been fascinated with space and the endless wonder that lied beyond the stars.

Landing on Thra with the rest of Team C – Natasha “Black Widow” Romanoff, Clint “Hawkeye” Barton, John Crichton, Aeryn Sun, Nebula, and Rocket Raccoon, he got that opportunity with seeing the lush and green atmosphere of the planet.

Crichton, Aeryn, Nebula, and Rocket were just as amazed to see it.

“How does it look in our dimension?” Gonzo asked.

Barton surveyed the land, wishing there was some sort of directory to guide them. “So…where do we even begin looking for our Stone?”

“On Thra, the Power Stone is what energizes the Crystal of Truth,” Nebula said.

“And what’s that?” Romanoff inquired.

“The beating heart of Thra,” Aeryn told her.

“Is it really a good idea to take the Power Stone from this reality?” Crichton pondered. “That’s exactly what put it in the state of decay in our reality.”

“We’ll return it, once we’ve accomplished our mission,” Aeryn reassured.

As the rest of the team were deep in their discussion, Gonzo spotted something in the distance that suddenly caused him to separate from the group and run off. “Gonzo!” Crichton called out. “Where you going?!”

The weirdo didn’t give him a direct answer, which only prompted Natasha to volunteer, “I’ll go get him.” She curiously pursued Gonzo across a meadow, until they stopped at a tall, wide tree in the midst.

Gonzo looked around its base, perplexed and in quite a rush. “Where did he go?!”

“Where did who go?” Natasha asked him, right before she felt something small and hard fall on top of her head. It only stung for a brief second, but it nonetheless drew her curiosity as to where it came from.

The same thing happened to Gonzo, only he reacted in more agony. “Owww!”

Natasha figured it must’ve been acorns falling from the tree, directing her attention up towards the tree. A smirk developed on the usually stern face of the Black Widow when she spotted a small creature sitting in the tree. It sported tridactyl hands and small beady eyes on a potato-shaped head that lacked external ears. It welded a wooden spoon as some sort of weapon, while cursing at Natasha and Gonzo in an alien language.

“There he is!” Gonzo looked up as well.

“This lil’ guy was who you were chasing?” Natasha indicated the alien. “He looks harmless.” She returned her gaze on the creature, gingerly waving hello to it. “It’s O.K. We’re not gonna hurt ya.”

The creature again shouted in his foreign language, jumping from the tree and landing into a defensive stance right in front of Gonzo and Romanoff. With its wooden spoon, it struck Gonzo on the head and Romanoff on the leg. “Ouch!” the former griped. “He’s sure gonna hurt us!”

“What’s going on?” They heard Barton approach with the rest of the team.

Aeryn noticed the creature Gonzo and Romanoff encountered, recognizing its species. “That’s a Podling. One of the natives of this planet.”

“Are they always so violent?” Gonzo asked, dodging more swings from the so-called “Podling” creature. “As fun as this is, it’s starting to get really annoying! Can somebody stop this guy?!”

Rocket obliged to the weirdo’s request by taking out a small blaster and firing a concentrated laser that blew the wooden spoon out of the Podling’s grip. Terrified, he saw it rendered to ash that scattered over the grass. Now defenseless, the Podling cowered at the powerful visitors towering over him.

Natasha, however, attempted once more with a gentler approach. She placed a hand on her chest and enunciated, “Na…tash…a.” It was her way of not only establishing peace with the creature but communicating via introduction.

The Podling seemed to understand, growing calmer and responding with one word: “Hup.” 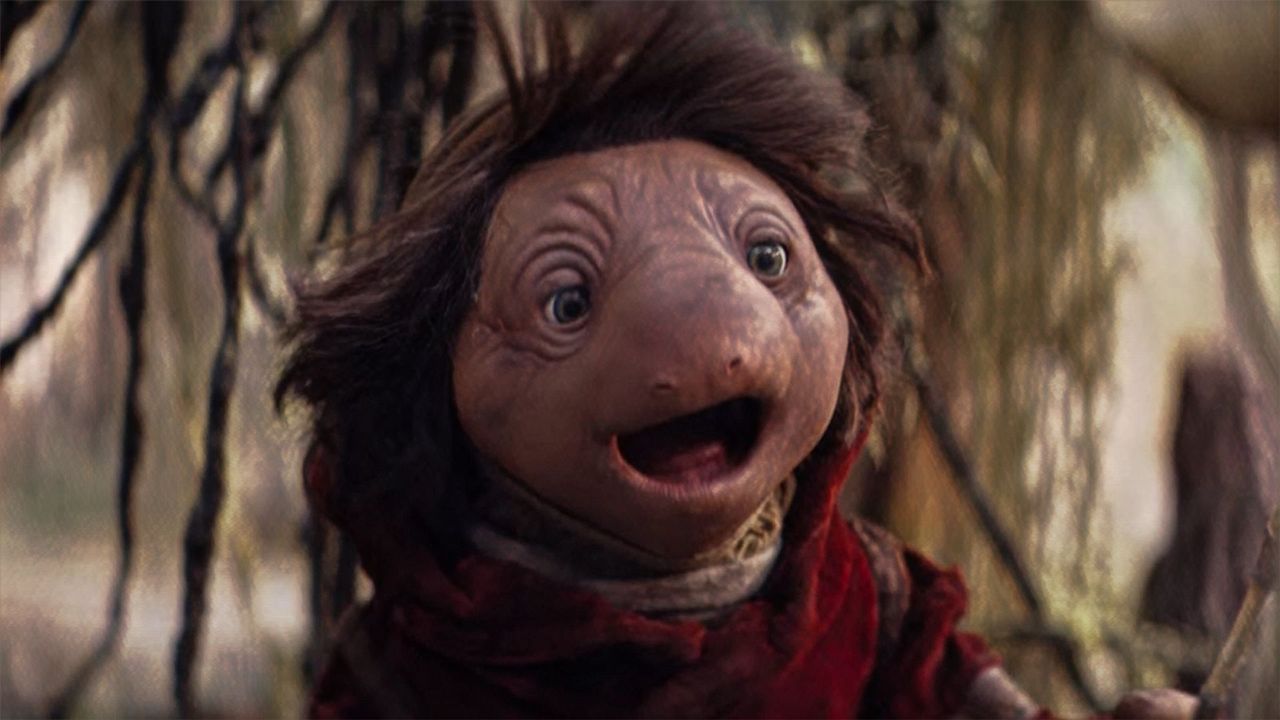 “Hup?” Barton repeated the term. “Is that his name?”

Romanoff shrugged. “I think so.”

“Well, unless ‘Hup’ can show us the direction of where the Power Stone is, we’re wastin’ our time here,” Rocket objected. “Let’s go find that castle ourselves.”

On the word “castle,” Hup’s anxiety kicked in again, shouting repetitively in his distinct language. Crichton gathered from the Podling’s attitude, “I don’t think he wants us to go anywhere near that castle.”

“Maybe he can take us there,” Natasha suggested.

Noting her connection with the Podling, Barton presumed, “Are you finding some sort of kindred spirit with this little guy?”

Although Hup didn’t fully understand, something about the word “Avenger” struck much inspiration in the Podling – enough to assist the outsiders on their bold journey. Of course, much later, as the group reached the Castle of the Crystal, Hup began to lose his nerve.

The castle stood amid a more foreboding area of Thra, shrouded in darkness. 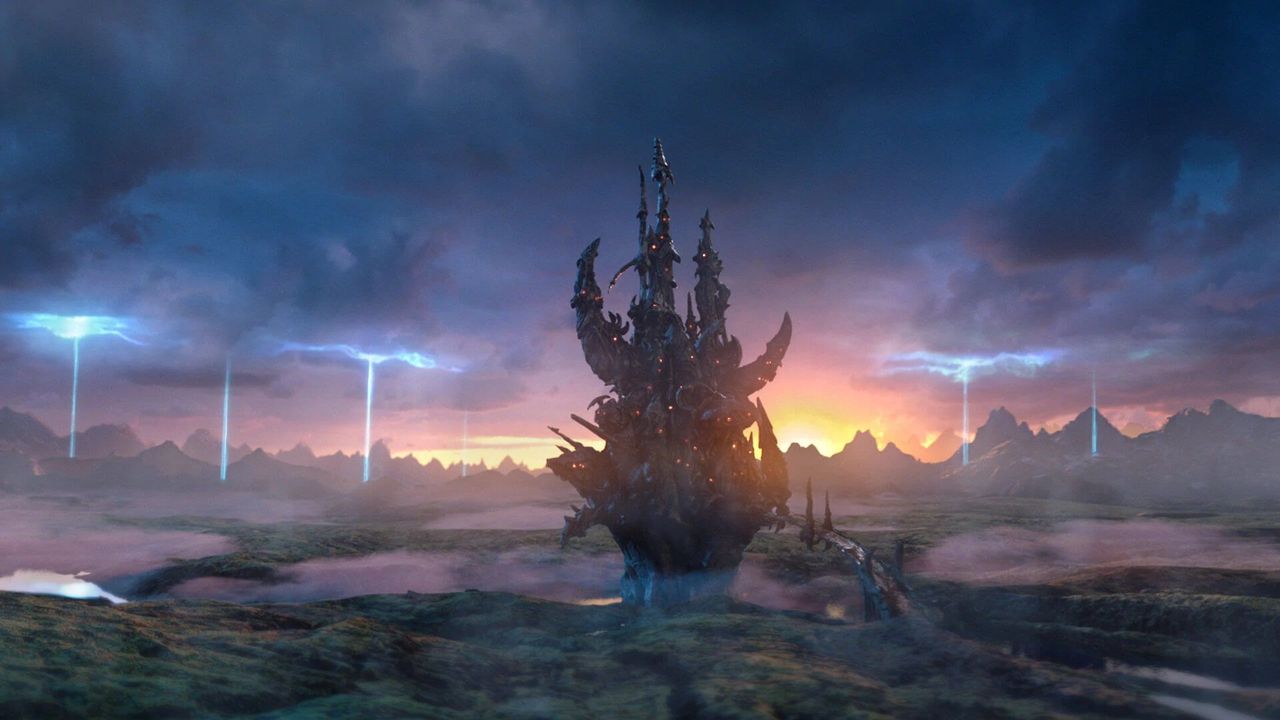 “I can see why the lil’ guy didn’t want us to come here,” Crichton said, sharing Hup’s apprehension.

Gonzo and Hup stayed hidden behind a large rock while the rest of the team stealthily snuck inside the castle. There, looking in from the shadows, they discovered a race of reptilian, bird-like creatures surrounding the crystal in a chamber at the heart of the castle. “The Skeksis Empire,” Aeryn identified them. 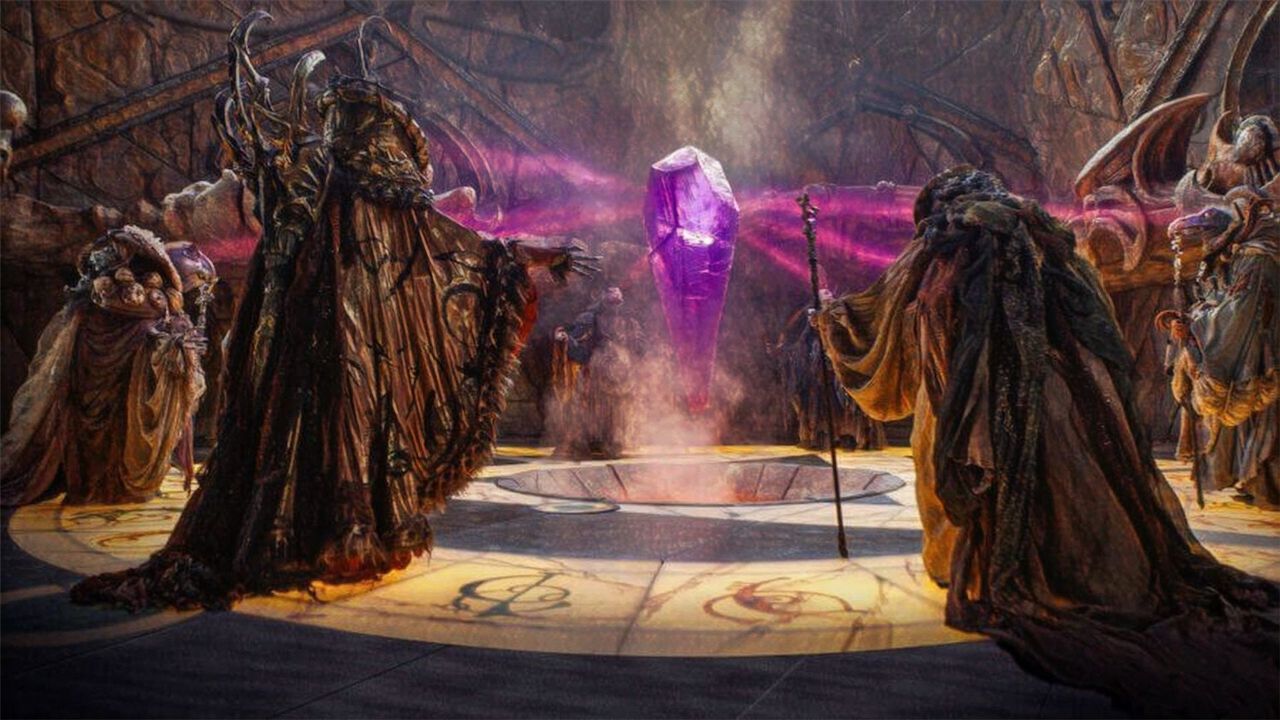 “What the hell are they doing?” Crichton wondered. “Praying to it?”

“It’s the Ceremony of the Sun,” the gravelly voice of an old woman spoke from behind the interlopers, spooking them into nearly exposing themselves to the Skeksis. Turning around, they noticed a one-eyed, noseless horned creature with silvery hair, leathered dark brown skin, and a hunched posture. Aided by a walking stick, she somehow snuck up on the team without so much as making a sound. “You are not of this world or any world within this one,” she said of the interlopers.

“What gave it away?” Rocket derided.

“You must turn back,” the old creature urged them. “Abandon your quest for the Power Stone and leave this Thra be.”

“How do you know so much about our quest?” Natasha asked her.

Aeryn eyed the old hag with familiarity. “Because she’s Aughra – the eyes and voice of Thra,” the Sebacean once again flexed her planetary knowledge. “You’re her living embodiment of it.” 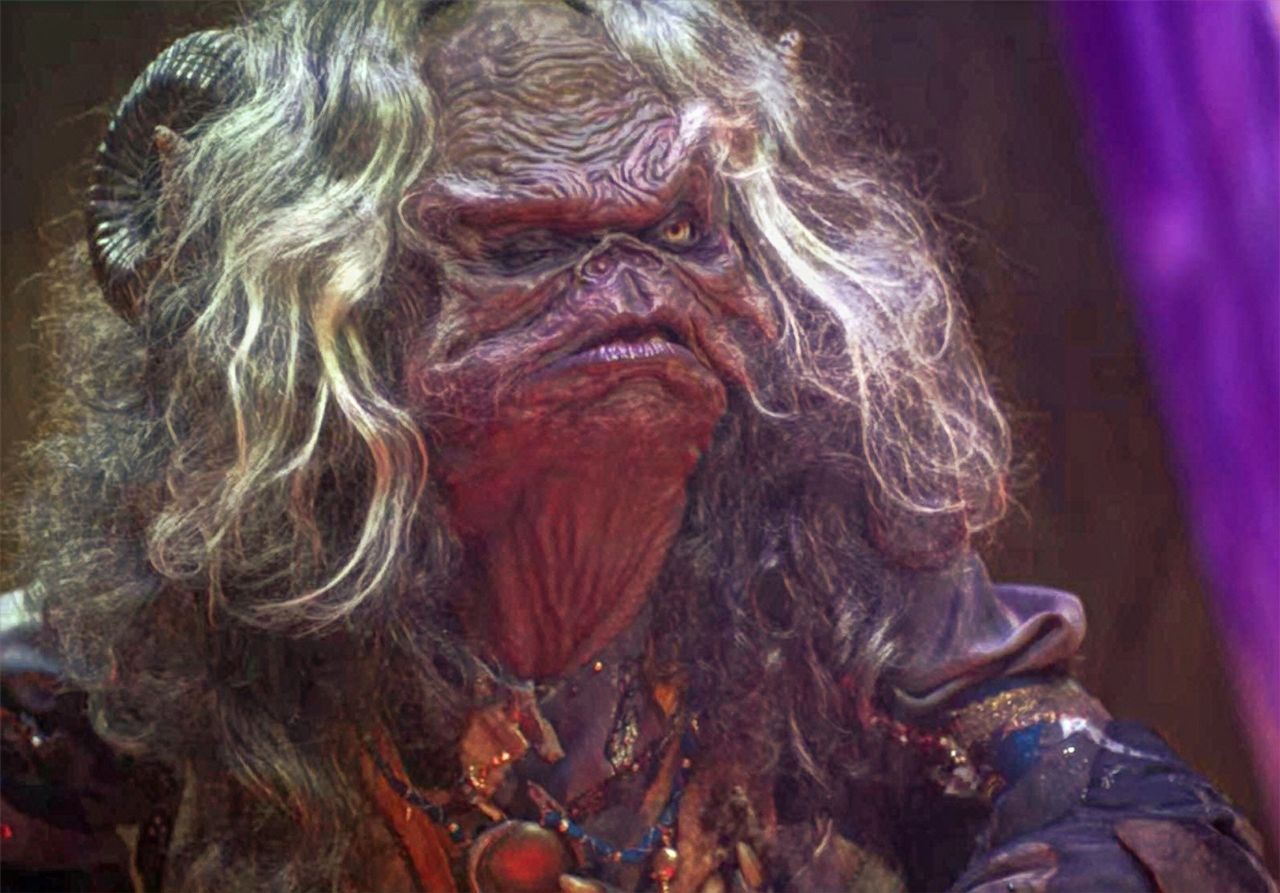 “You have great intelligence in you, Peacekeeper,” Aughra said.

“Former Peacekeeper,” Aeryn clarified. “And we give you our word that the Power Stone will return to Thra, once we’ve completed our quest.”

“I cannot allow it!” Aughra firmly (and loudly) denied.

Luckily, her boisterous tone was drowned out by a thunderous noise that roared outside the castle walls. The team barely heard Gonzo over the radio when he alerted, “Hey, uh, guys? A really big spaceship just dropped in from the sky and is hovering right over the castle!”

“I don’t know! Like any other alien spaceship?” Gonzo said. “It’s massive, that’s for sure. Almost like it belongs to some evil intergalactic warlord.”

While vague, his description of the spaceship alarmed Nebula, who knew of only one individual that traveled in such a craft. Her suspicions were proven as soon as an imposing figure in shimmering, blood-soaked golden armor materialized inside the chamber. Its presence terrified the Skeksis gathered there into bowing and praising the figure by its name: “Lord Thanos.” 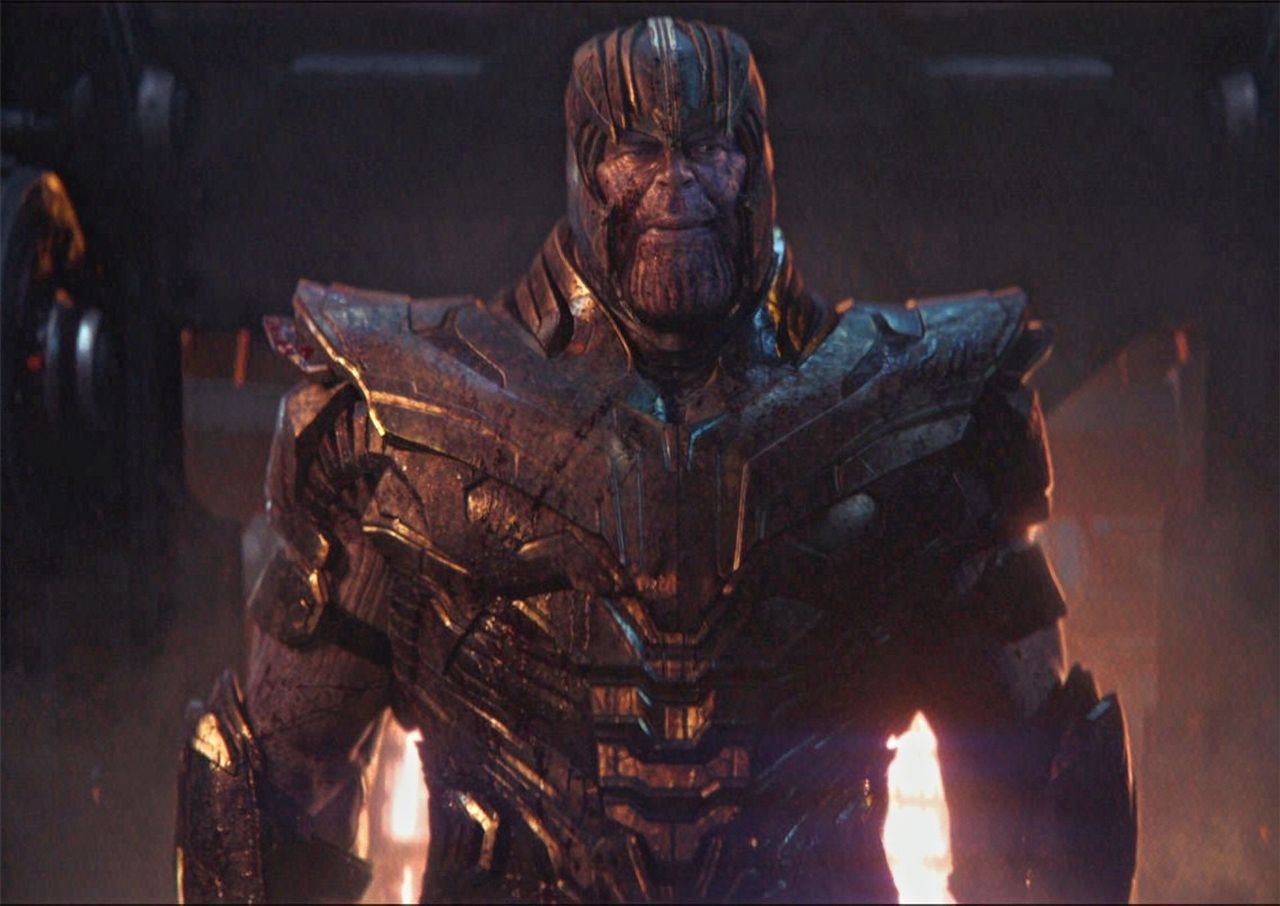 “You’ve gotta be kidding me!” a mortified Crichton gasped. The horror was synonymous with his teammates, as they all looked on Thanos, who carried his double-edged sword into the castle with him.

“You can come out now,” he addressed the specific corner of the shadows where the team took cover. “I know what you’re doing in this dimension. There’s no use in hiding anymore.”

Following on his mock recommendation, the team manifested with each of their weapons trained on the Mad Titan. Nebula in particular emerged with a question: “How are you here? You used the Stones from our world…rendered them to atoms…and it killed you!”

“I was on the verge of death…until a stranger from another universe revitalized me,” Thanos explained. “He told me that my work isn’t done…that there was an entire multiverse to be corrected.”

“The multiverse is just fine!” Crichton contested. “It doesn’t need your Barney-looking ass anywhere near it!”

“You have no idea how wrong you are, John Crichton,” Thanos coldly refuted. “I cannot allow any of you to undo my work.” He proceeded to engage in a fierce battle with Crichton, Aeryn, Romanoff, Barton, Rocket, and Nebula – none of whom were any match for the Mad Titan, who had somehow grown more powerful even without the aid of the Infinity Stones.

It was only when Rocket managed to plant a plasma grenade onto Thanos’ back and detonate it that they gained the upper hand. Downed, Thanos turned to the heavens and desperately beckoned, “Gamora! Assist me!”

Nebula thought he was praying to the spirit of a dead woman, before another figure materialized in the chamber. To Nebula’s shock, it was indeed Gamora, but not quite the one Nebula knew when she last saw her. It was a Gamora who was still loyal to Thanos, adorned in war armor similar to the days when she and Nebula trained together. 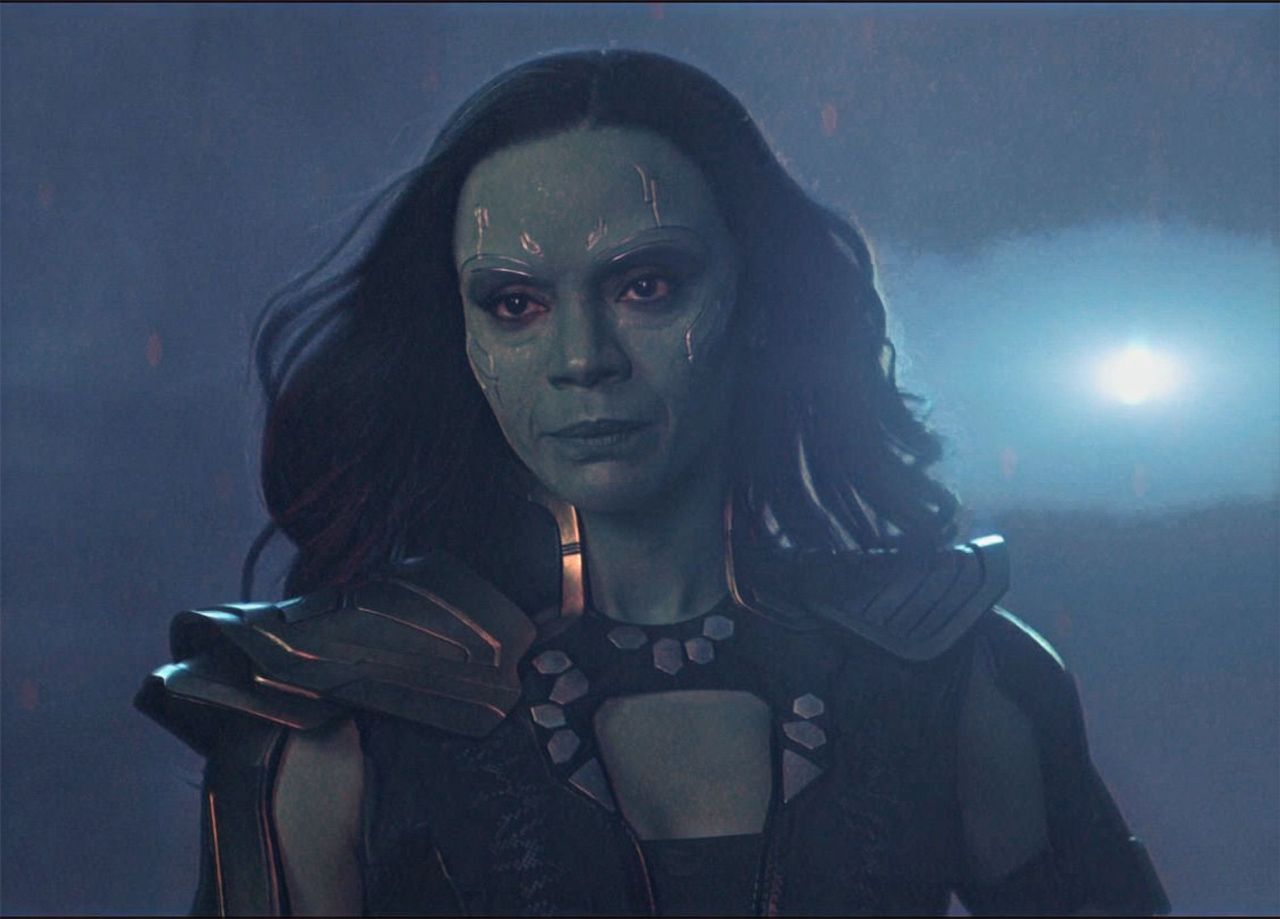 Memories of that training flooded back to Nebula, as she found herself now engaging with Gamora, whose swiftness, speed, and precision were too much for the team to keep up with. While she had them distracted, the recovering Thanos made for the Crystal of Truth, hurling his sword like a javelin towards it. The crystal shattered and triggered a chain reaction that sent all of Thra spiraling into chaos. The earth quaked, knocking all of those inside and outside the castle off their balance.

The Power Stone lied among the pile of crystal shards, waiting for Thanos to retrieve it. Before he could, however, Romanoff got to it first. “Finder’s keepers,” she teased the Mad Titan, prior to tossing the stone over to Barton. It was an act that ultimately was her undoing.

I shouldn’t have taken my eyes off him…even for a second.

That was the thought that ran through her mind, as she felt the blade from Thanos’ double-edged sword tear through her torso from the back. The blade was large enough to go through her entire front, from her neck down to her lower abdomen, slicing every vital organ. The pain was excruciating, yet Natasha still assembled a confident smile for Barton and the rest of her team.

The Hawkeye nearly dropped the Power Stone that he succeeded in catching, watching in horror as Natasha’s lifeless, impaled body slid off the colossal blade and to the floor. Caught in a grieving trance, Barton hardly heard Nebula calling for him to retreat along with the remaining team members, driven by the entire castle splintering and collapsing all around them.

Thanos and Gamora made their own tactical retreat, beaming back aboard Sanctuary II. “Forgive me, Father,” Gamora begged, as soon as they were aboard. “I should have cut the Terran woman down as soon as she had the stone.”

Thanos looked out from the nearest window, seeing the ship registered to the Guardians of the Galaxy ascending towards the sky. Once it was near the clouds, some sort of portal opened, large enough for the ship to fly through it and vanish out of existence. “So, that’s how they’re doing it,” Thanos muttered.

Reminded that Gamora was in the room with him, Thanos turned and requested, “Have Maw scan that singularity right away.” He pointed directly to the portal that was beginning to close. “We haven’t lost just yet.” 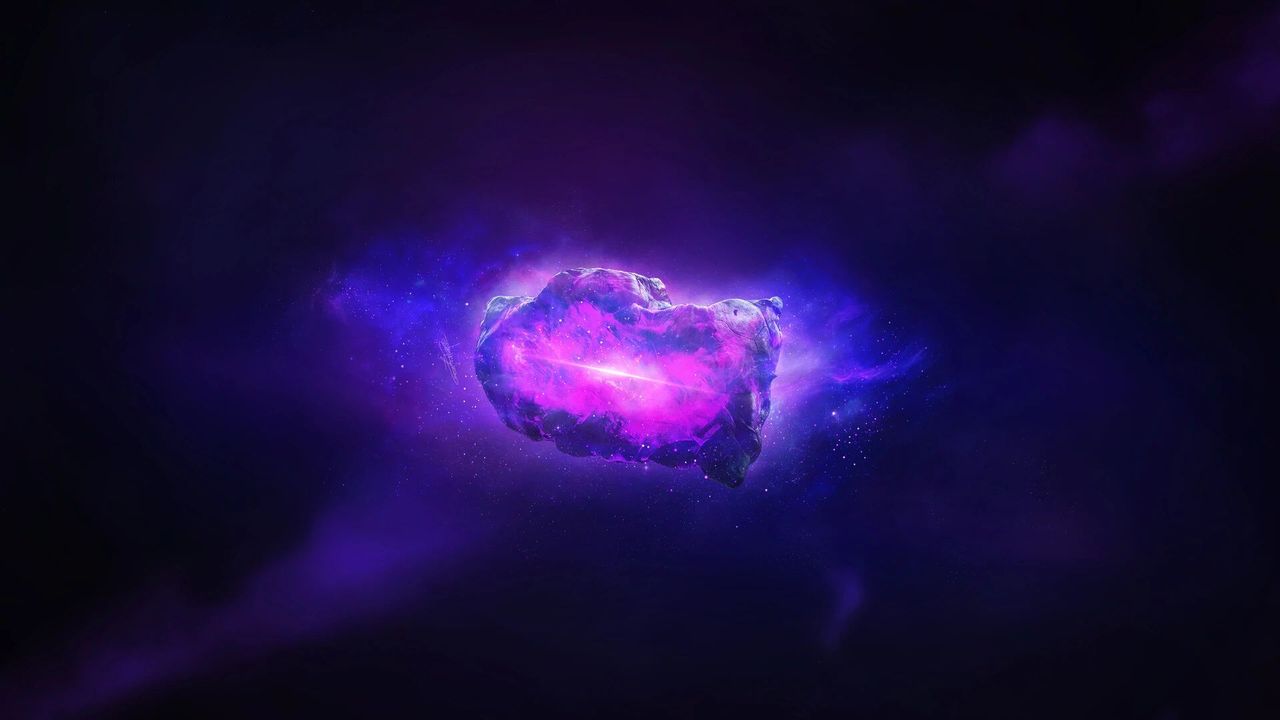