Two for One Special

Sometimes when you rescue your brother/ex from a tree you also rescue the sorceress who put him there.

Viviane hurried through her halls of glass and air. She wasn’t going to ignore a commotion on the shore, especially one near Merlin’s tree. She paused to catch her breath (urgency always made her look younger), and stepped above the surface, only to be greeted by an incredibly strange scene.

A woman with her wild hair twisted up off her neck, the skirt of her green dress hiked well above her knee, was crouched to hack at the base of the hawthorne with a woodsman’s axe. The roses that had grown over it now trailed over the ground, and a dainty woman with a sweet, vague sort of expression was picking through the branches, taking cuttings, as if she were in a garden. If she weren’t standing a scarce few feet from a madwoman with an axe, it wouldn’t have been quite as remarkable, but she was almost the most shocking figure given the situation.

Viviane decided she needed to take the situation firmly in hand. She straightened her spine and her shoulders, drawing a deep breath to speak with authority. “How dare you pull my roses down? How dare you,” her vocabulary briefly deserted her. Attack? Lop? Sunder? “...break my tree?”

The axe didn’t falter from its arrhythmic hacking, the slow, intense whack--whack-whack of the blows ominous in her ears. The less violent woman actually responded, gracefully bringing herself upright and smiling pleasantly. Viviane reluctantly gave her most of her attention, leaving the wild one to the corner of her eye.

“Forgive our intrusion,” she said, still with that gentle, pleasant smile. “We only pulled down and not up, so the roots should be untouched. As for the tree…” They both turned to look just in time to see the other woman rest her axe-head on the ground and stand up with a whoosh of breath. She didn’t look back at them, leaning on the axe-handle and regaining her breath with a frown pinching her forehead. “...there might be some left after we get Merlin out?”

Viviane felt wrong-footed in the face of that kind of assurance. “But… That’s… It’s… He’s supposed to be in there!”

The wild woman snorted and went back to work with her axe. There was no reasoning with her, but maybe the other? The other woman looked at her inquiringly, her eyes wide and curious. They were women, even if one of them was wild. Maybe they would understand better than her father?

“I don’t want to lie with him!” she blurted out, and shrank at the look of disgust that came over the formerly sympathetic face.

“Really, Merlin,” the woman said, disdain dripping from every word. “You are a married man and she is a child.”

“Merlinnnnnnnnnn!” the wild woman growled, winding her axe back for a heavier blow. Viviane jumped a little from the sudden noise from the previously silent woman.

The other woman took her arm, pulling them side-by-side, and Viviane looked up at her, startled. “You can call me Auntie Loena,” she said.

“Obviously you’ll come stay with us, so we can ensure Merlin doesn’t trouble you.”

“I only wanted to learn his magics,” Viviane offered. She didn’t think she needed to go anywhere with these people.

“There are better ways of attaining magical power than traipsing after vile,” she emphasized the word with a Chop! of her axe biting into the tree. “Old!” Chop! “Men!” Chop!

“Stay, sister! Stay! We are not as old as all that!” Myrddin interjected, taking no notice of the blows of the axe, which were landed quite near enough to his head that he might have been forgiven for asking her to stay her axe instead of her tongue.

‘Auntie Loena’ ignored them, smiling down at Viviane and patting her arm. “If you’re interested in advancing your magics you certainly want to visit us. There are more than enough windows to hone your skills in prophecy. Besides,” she lowered her voice. “A daughter like you would be a balm to Gwen’s heart.”

Viviane looked her askance. “I already have a family, including a mother.”

“Yes, but they haven’t done well by you,” Loena stated with the same serene confidence from before.

Viviane bristled. “You don’t know anything about my family!”

“I know you’re rising sixteen and built your entire household here, where your parents aren’t. Underwater.”

Viviane drew breath, but didn’t answer back. She didn’t know how to argue that point. It was difficult to counter the sheer inevitability this woman exuded.

“Do you have magics to teach me?” she asked instead.

“Oh, goodness no. Unless stubbornness counts,” she paused. “Or crying. I can teach you how to cry.”

“Ha!” Gwen interjected from over where she was still hacking Myrddin free. It sounded like she disagreed.

Viviane was absolutely certain these women knew him by that name. And maybe knew each other by names they hadn’t given. In fact, she thought they probably knew many interesting things, things worth learning. She wasn’t certain those things were worth Myrddin being free from the hawthorne, but she was willing to find out.

This picture has Myrddin under a rock not in a tree, but I really love the expression Rheam gave Viviane. She looks both dangerous and triumphant, and maybe a little wild. 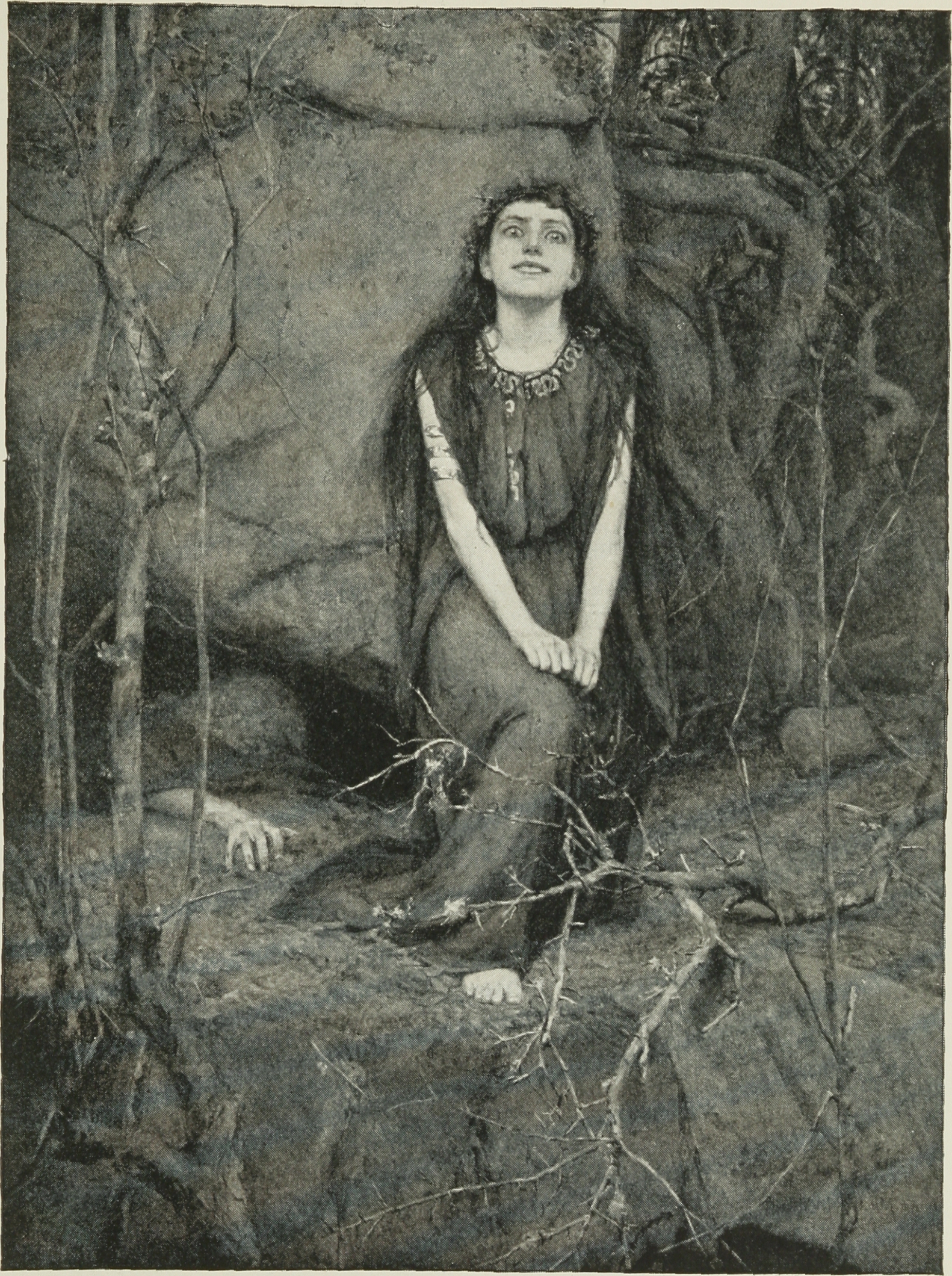 Doré’s picture looks more dreamy and moonlit, but I like the defeated slouch he gave to Myrddin. 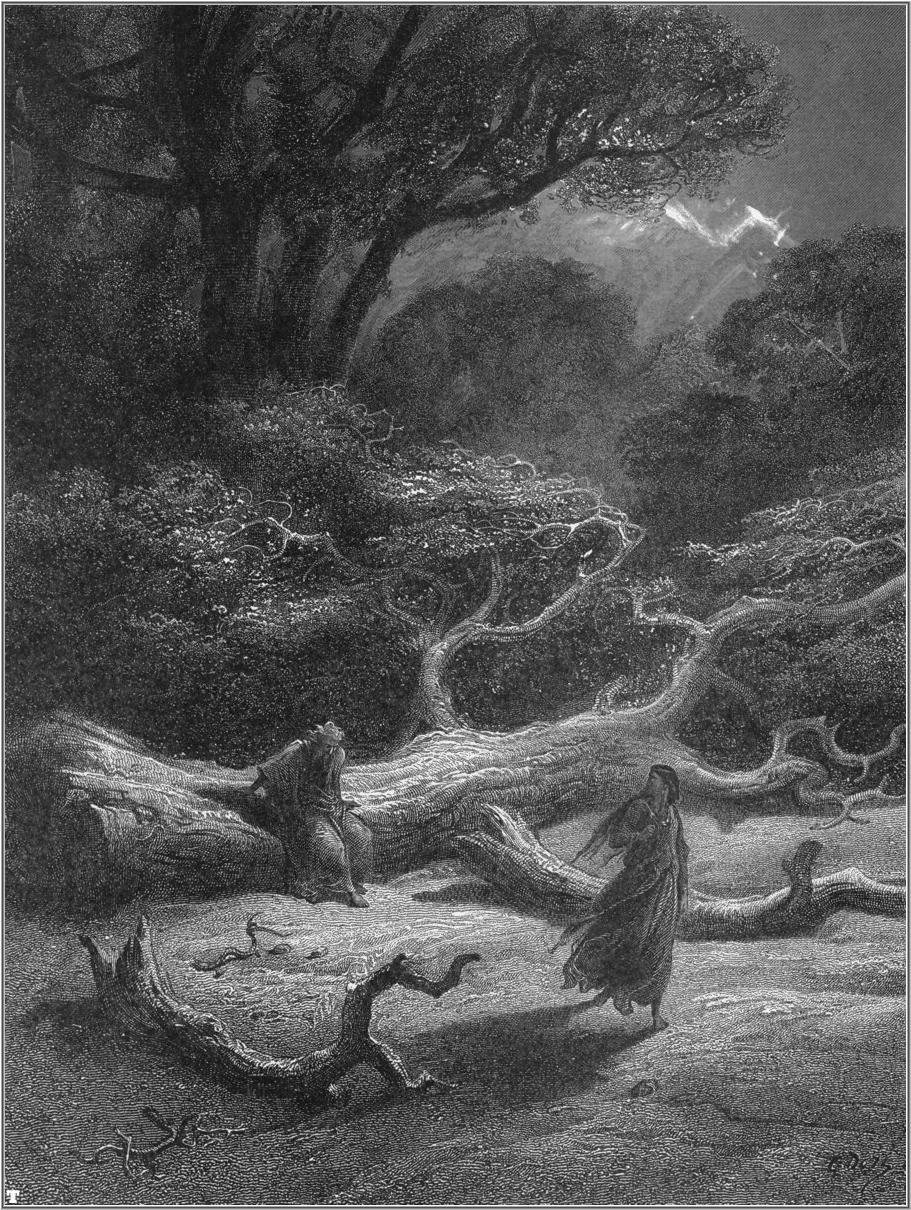 landofnowhere as well as 1 guest left kudos on this work!