I saw this prompt and thought it clearly had my name written all over it -- in fact, you essentially requested a fic I'd been thinking of writing for ages -- so thank you for requesting it! Thanks also to S. for beta-reading; any remaining errors are my own.

For the benefit of readers who are not the recipient, I thought it might be a good idea to include a link to the Wilton Diptych, so here's the National Gallery's page for it. If you click on the little magnifying glass icon at the right you can see the details in high resolution.

ETA, 09/17/21: The incredibly talented SekiHamsterDiesTwice has done an absolutely stunning illustration of this story. It is now visible at the end of the fic. The original is here.

Master Ladislaus of Prague had found great success in England, since he came to London with Princess Anna who had become Queen Anne, God rest her soul.

He had painted her portrait, before she'd been married, for the English ambassadors to take back to their king. When he'd brought it to her for her approval, she'd beamed for a moment and then frowned at him and said, "My nose is much bigger than this, isn't it?"

He'd fumbled for the right words, since he couldn't very well tell the King's sister that he'd painted her portrait to flatter her, even if she had come right out and asked. "My lady," he'd begun, "it is customary for portraits -- "

And then she'd interrupted him, just like that: "Well, don't you think you should make it bigger in the portrait, then?"

"My lady?" Master Ladislaus wondered if he'd been misinformed about the vanity of women.

"It's just that..." The princess clasped her hands in front of her, looking down as though she were suddenly very interested in the way her fingers fit together. "I don't want King Richard to be disappointed." She bites her lip. "When I finally meet him."

He'd thought of telling her that of course King Richard wouldn't be disappointed, that she was a sweet and lovely girl, even if she was, truth be told, rather plain -- but he had done as she asked.

And in the end the king had not been disappointed, had in fact been quite enthralled with his new bride, and his love for her had extended into considerable goodwill for her Bohemian entourage, enough that many of them had remained in England long enough to make Englishmen grumble about guests who had overstayed their welcome. But then, none of them were master craftsmen, and a good patron was hard to find. King Wenceslaus is a prodigal spender, of course, but it was deeply satisfying to work for a king who had an interest in the arts even when they didn't depict scantily-clad bathhouse attendants.

Master Ladislaus's only regret is that his greatest masterpiece is one born of grief.

The small private altarpiece he has painted for King Richard is, he thinks, the finest work he has ever created. It's taken him all of the eight months the king has been abroad in Ireland to prepare the likenesses he's specified for the faces of the saints, and for his apprentices to amass enough powdered lapis lazuli to make the robes of the Virgin and the angels glow like they should. He's nearly blinded himself squinting over the fine details: the tiny badges worn by the angels, bearing the king's own insignia of the white hart; the delicate interweaving of peascods and rosemary, harts and eagles, on the king's painted scarlet gown; the almost imperceptible crown of thorns, punched into the frail gold-leaf nimbus that crowns the Christ-child; the minuscule map of Britain that sits atop the banner of Saint George, presented to King Richard by Christ and His angels with open hands.

It is almost too beautiful for an earthly king, Master Ladislaus has sometimes found himself thinking as he works at it, and then he reminds himself that the content of the work is surely less a peril to his soul than his pride in it. God Himself looked at His creation and called it good, but there are limits to these kinds of things. King Richard, after all, has a rather exalted view of himself, of his own kingship, of kingship in general. Perhaps now he feels it is all he has left.

It is a fine day in June when Master Ladislaus and his apprentices present the finished piece to the king, in his bedchamber at the palace of Westminster -- too small a chamber for a king, for he refuses to use any rooms where he's been with Queen Anne. The sight of him is uncanny: he had gone to Ireland a year ago to take out his ferocious grief for his queen upon the wild Irish, and since his return he has seemed less real than the painted figures in the altarpiece Master Ladislaus holds in his hands. He looks splendid, but stretched as thin as gold leaf -- and, like gold leaf, the king's sorrow adheres to everything it touches.

When he opens the panels, everyone in the room holds their breath for a long moment, so that it's clearly audible when the king inhales sharply through his teeth. His long fingers pause an inch from the painted surface, and for an instant his face is terrible to behold as he looks upon the familiar figures: the Blessed Virgin bears the face of his mother, Joan of Kent, holding his long-dead brother Edward as the Christ-child. Behind his own likeness stand his father, as Saint Edmund, bearing the arrow of his martyrdom, and his legendary grandfather as his namesake Edward the Confessor.

Master Ladislaus had begun to ask the king, when he was first given the commission, if the late queen's portrait should be included, since King Richard evidently wished to memorialize the dead, and the look he receives now as the king turns his eyes on him is almost as chilling. Were they poor likenesses, then? Or was it worse to show the dead truly as they had been?

"How did you do this?" he says, finally. "My father, my brother -- they died before you ever left Bohemia -- " King Richard takes another deep breath, closing his eyes for a moment, and when he opens them, the suspicion has gone and his eyes are bright with tears.

It had taken Master Ladislaus many months and numerous conversations with uncles and cousins, retainers and body-servants, and an elderly Gascon woman who had once served as the king's wet-nurse. He had seen Joan of Kent in person, of course, but that had been in her waning years. There will be time for the truth later, and for a moment, he envisions an angel with brown hair and an unfashionably large nose.

"I thank God," he says, "for he has given me the gift of true likenesses." 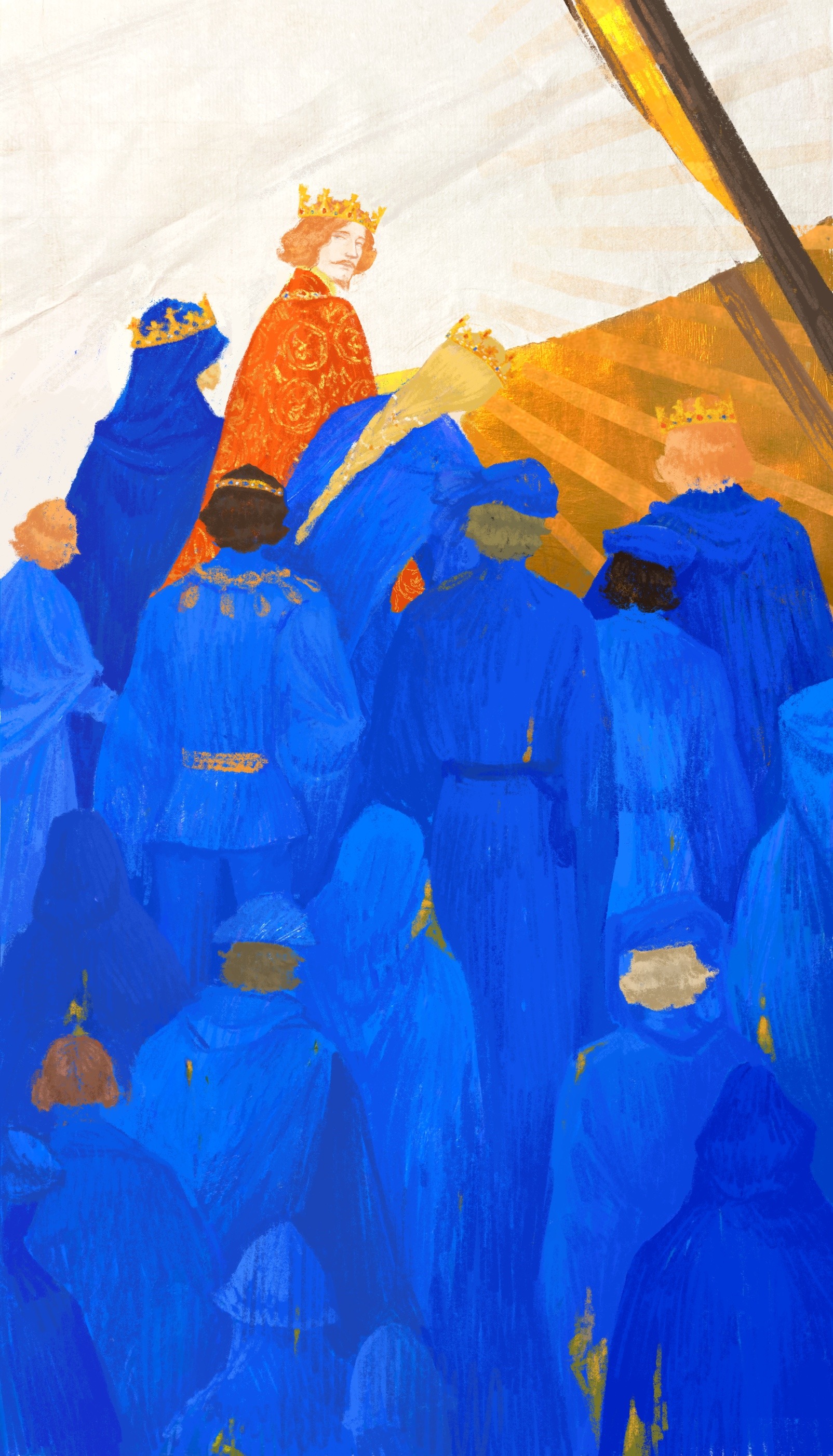 Of course, the identity of the artist of the Wilton Diptych is unknown, and even his nationality is uncertain: the prevailing opinion seems to be that he was probably French. I've chosen to make my fictional artist Bohemian more for thematic reasons than because I'm strongly committed to that theory (I'm not an art historian, I just play one in the classroom), although there's a legitimate case for it. The date of the Diptych is also unknown, although generally assumed to have been in the mid-1390s. I've chosen the earlier end of that window for purposes of this fic so that it would take place before Richard's second marriage -- again, it seemed more thematically appropriate.

The idea of the Virgin and Child and the saints being likenesses of members of the royal family owes a lot to Margaret Galway's "The Wilton Diptych: A Postscript" (The Archaeological Journal 107: 1950), although I find the conclusions she draws about the painting's commission and date highly improbable. I'm also not convinced by her assertion that John the Baptist in the Diptych is a portrait of John of Gaunt, since both the Baptist's traditional attire and the conflicted nature of Gaunt's relationship with Richard make him an unlikely choice to portray Richard's favorite saint. But the idea that Richard's dead parents, brother, and grandfather are represented in the Diptych I find quite moving and thus chose to make it a focal point here.

Many thanks, again, to SekiHamsterDiesTwice for the beautiful illustration!