gods, if anyone had told me

when I volunteered for this job

that I'd be chasing rogue gardeners

I would have laughed in their face

you know about flowers, right?

I kept my mother's roses alive for years with only the most incompetent gardener for support.

I nursed them through blackspot, witches' broom, and botrytis blight.

I even successfully hybridized a promising new cross that I'm certain would have taken the Horticulture Society by storm, if all living examples were not now within ghost territory.

tell me what this is 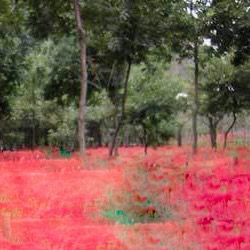 You'll have to do better than that. 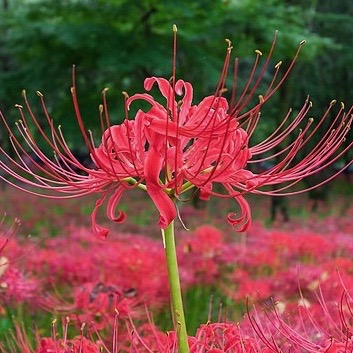 Five. Get out of there.

so i was right

i don't need to run, hyeon

What were you doing in a field of red spider lilies?

What was a field of red spider lilies doing existing at all?

Those ghost-magnets have been banned since the main rift first appeared.

I was hoping you could tell me

Why would I know?

you're the one tight with the Horticulture Society

The Horticulture Society? They won't even let you display Lycoris squamigera or Griffinia hyacinthina, though of course they don't have the same effect. I couldn't buy red spider lily for all the fortune of my house.

and I've just been told there's another cluster

The good news: it's a very dry autumn.

is that good news?

No one likes walks in the rain, Five.

Anyway, that's not the point.

Red spider lilies only bloom when it's wet. We've had so little rain, most of what got planted probably never bloomed at all.

you mean there's more of them?

we had to let one go

too many ghosts already gathered

couldn't get close enough for flamethrowers

how is this good news?

Because they also can't survive our winters.

As I said, they're very expensive flowers.

Whoever planted them, if he wants to try again next year, will have to dig up any remaining bulbs within the next few weeks and store them somewhere safe and dry.

They like sandy soil. I'm sending you a map of all the parks that might be suitable.

central command will love you

I have a reputation to uphold as a scion of an ancient and noble house. A reputation of doing nothing useful. My sister would never forgive me if word got out.

and you think it would be a boost

if I took credit

I barely know enough about flowers not to stand in them

no one is going to believe I drew this map

Oh, very well. Just leave my name out of it. I don't need the love of central command.

we got the bastard

gods, if anyone had told me

when I volunteered for this job

that I'd be chasing rogue gardeners

I would have laughed in their face

Congratulations. It is four in the morning.

that was the good news

I want you to know I just sat up so fast in bed I banged my elbow.

You're telling me the head of the Horticulture Society is responsible for deliberately planting gardens that draw ghosts?

I am telling you that

As the only specimens of that rose that I managed to remove from the estate before it fell were the cut flowers I gave to you, which I'm sure have long since wilted and been throw away, it's rather a moot point.

and no, they haven't

What? What hasn't what?

they're hanging in my cockpit

not really within regulation, but chung sol hasn't said anything

probably just holding it in reserve

You kept the roses.

and listening to the rain drumming on its skin

it's the only time it ever feels peaceful in there

there's a storm coming around dawn

and I think we can fit two in the cockpit