Chloe's always been able to get Beca to do things she wants. So when Chloe wants Beca to be her fake girlfriend at her best friend's wedding, Beca does it. She wasn't expecting it to be so easy. But while she's busy figuring out why that is, the bride goes missing. Looks like Beca and Chloe aren't the only ones lying.

Hey, folks! I won't keep you long. Just wanted to say hello and you're beautiful. Have a great day!

This amazing storyart created by Sketchywave, who you should all totes follow on Tumblr! Thanks, Wavey! <3 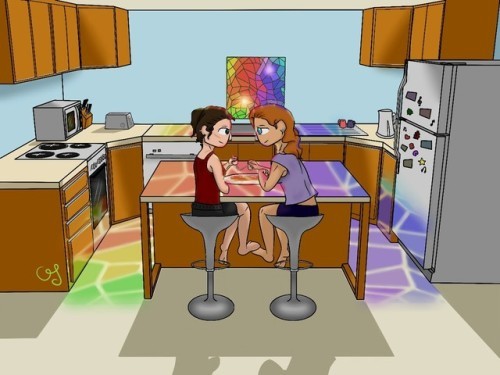 The front door slams and Beca sighs, tapping the phone on her chest to pause her music. So much for napping. She tucks her hands back behind her head, fluffing her pillow up a little so she can see the bedroom door. One...two...three...

The door flies open and red curls and denim jacket come bouncing through. “Oh, there you are!”

Chloe grins, shrugging out of her jacket and throwing it on the back of Beca’s desk chair, on top of the pink hoodie she’d left there the day before. Then she hops up on the bed, moves Beca’s phone from her chest to the nightstand, and plops herself down beside her. She flings a leg and an arm around the brunette, tugging her closer and resting her head on Beca’s shoulder.

“Shut up, you like it.” Chloe nuzzles even closer with an appreciative hum. Beca just rolls her eyes. “Actually… I need your help.”

Beca twists enough that she can look down at Chloe. “With what? Is that asshole at work messing with you again?”

Chloe giggles, her breath dancing over Beca’s collarbone where her t-shirt has pulled aside. “No, I think the slashed tires sent the message well enough. Thank you. No, with Aubrey’s wedding. You know, my friend from back home?”

“Oh, gross, yeah. The one you talk to every other day and always tell I say ‘hey’ when I don’t.” Beca turns a suspicious glare on her. “I am not doing wedding stuff.”

“You don’t have to!” Chloe quickly assures, patting Beca’s side. “No, no. It’s… Well. Aubrey called. And she said Jesse invited Tom to be in the wedding party…”

Something like fire crawls down Beca’s spine and her nose crinkles up. “That dumbfuck that cheated on you with the chick whose nipples looked like bologna?”

Chloe seems oddly pleased that Beca remembered. She pops up, turning onto her stomach and propping her chin up on Beca’s chest. Anyone else in the world would have gotten stabbed in the eye, getting this close, but it’s Chloe, so Beca just tilts her head back a bit so they aren’t breathing the same air. “That’s the one. He’s Jesse’s cousin, apparently, and his mom forced him to put him in the wedding. And he’s bringing his girlfriend. Barb. The nipples.”

“Mmm. And you want me to...severely injure you so you can’t make the wedding?”

Chloe’s snort bounces off the hollow of her throat and Beca uncrosses her legs to cross them the other way, body suddenly a little restless. “Please. Like you could actually hurt me.”

“I could take you.” Beca gives her best glare, which has never affected Chloe.

She rolls her eyes. “Only you could turn a death threat into a come on.”

“I am vastly skilled.” Chloe’s voice drips with innuendo and Beca pulls a hand from behind her head to flop it over Chloe’s face and push her away.

Chloe rolls off of her, landing on her back with her hands folded over her stomach. She reaches out with her leg, resting her toes against Beca’s ankle. “Awww, but your room is so much better.”

“It’s literally not.” Beca glances around the tiny room, vaguely registering that she needs to do laundry. “Remember when we moved in, you looked in here and said, ‘Oh, an extra closet!’ then dashed off to snatch up your room?”

“Okay, no. I distinctly remember you insisting I take the other room. Like a true gentlewoman.” Her toes start tapping a rhythm against the top of Beca’s foot.

“Shut up.” Chloe throws her arm out, smacking Beca in the stomach and pushing her breath out with an “Oof”. “We’re off topic.”

“So, Tom is coming to the wedding. With his ‘totally hot, supermodel girlfriend’, as I hear.” She throws some air quotes around the description, blue eyes rolling back into her head for a second, tongue lolling out. Beca laughs. “And I need a date. Pronto. That is better than his date. So. I had an idea.”

Beca shifts onto her side, the bed creaking a bit. She narrows her eyes when Chloe meets them. “I’m already trying to jump ship on this, but sure. What’s this idea of yours?”

Chloe smiles, the way she does every time Beca goes along with something she’s scheming. It’s the smile that led to their bathroom being painted pale lavender with music notes along the borders and to their kitchen window being replaced with stained glass. It’s the smile that ended them up as roommates to begin with, honestly, and Beca sighs, resigning herself to whatever insane idea Chloe’s had now. Chloe rolls up onto her elbow, her knee hooking over Beca’s. “Okay. So. I put an ad in the paper for a fake date.”

For a moment, Beca thinks she misheard. She grabs her ear, tugging at it, her earrings jingling. “I’m sorry. Was that English?”

“You’re going to take a complete stranger, who might be a psycho, as your fake date to your best friend’s wedding? Which you said you would be gone for a month for? To, what? Show up your ex from college? Whom you have claimed to have no feelings towards anymore, by the way.” Something about the thought of Chloe still liking that douche sets Beca’s teeth on edge. She just hates cheaters. A lot. That’s all.

“I don’t!” Chloe’s eyes grow wide and bright, like they do when she’s being completely sincere or looking at a puppy. “I just… I know it’s stupid, but he did hurt me. And I just want to seem like I’m doing better than him these days, you know? Just a little revenge.”

“You are, Chlo.” Beca huffs, taking her hands from behind her head and scooting up until she’s resting back on her elbows and can look Chloe in the eye. “You’re in vet school. You’re sitting pretty in your bank accounts. You work at the shelter. You have the most amazing roommate this side of the Atlantic.” She bobs her head side to side, smirking. “Colin Firth obviously being the only one better.”

Chloe hooks a finger in the hem of Beca’s shirt, leaning back as she laughs. The shirt pulls with her, stretching. “Well, you’re right about that. I do have the best roommate in the world, after Mr. Firth. Which is why…she’ll help me vet these potential dates?”

“Well, you said it. They’re strangers and could be insane. You’re a really good judge of character. So… Will you interview them with me?”

And perhaps it’s the hopeful glint in Chloe’s eyes or the fact that she really could be inviting psychos to spend weeks with her across the country, but Beca sighs. “God. Fine.” Chloe squeals. “Just so I know you’re not going with Hannibal Lecter’s protege or something.”

“Awww, you care.” Chloe throws her arms around Beca, forcing her elbows out from under her and pulling them back down. “Thanks, Becs! I owe you!”

Beca awkwardly pats Chloe’s back, straining to breathe in the redhead’s tight grip. “Yeah, yeah. Don’t kill me before your potential date can. Speaking of--I don’t think I should have to say it--but if your date kills me, that’s a veto from me.”

Chloe giggles, releasing her and rolling off the bed. “Okay, okay. I guess.” She snatches up Beca’s phone, typing in her passcode and scrolling through her playlist. After a moment, she smiles and taps the screen. “Love Lies” by Khalid and Normani starts playing and she leans over to rest the phone back on Beca’s sternum. “I’ll leave you to your afternoon. Dinner will be ready in an hour.”

“Thanks,” Beca says, settling back into the nap she’d been about to take before Chloe got home. She closes her eyes, letting the music fill her mind up until it’s all that’s left.

“Also, my first interview will be here in an hour and a half, ‘k, thanks!” Her bedroom door snaps closed.

After ten minutes of lecturing Chloe on giving the weirdos that responded to her ad their address, Beca insists she be the one to answer the door, just in case. She yanks it open, best scowl in place.

The man on the doorstep peers straight over her head for a moment, blinking, then glances down. “Oh. Hi. Is there a Chloe here?”

Beca crosses her arms, settling against the threshold. “Who are you?”

She nods, eyes narrowed. “Well, nope. No Chloe here. Sorry.” She kicks the door closed before he can get another word out.

In the living room, Chloe spreads her hands out, head pulling back a bit with a shake. “Beca. What the hell?”

“His name is Tim. You can’t introduce Tom to your boyfriend, Tim. What if you mess up? ‘Hey, Tom, this is Tom--I mean.’”

Beca stops with one hand on the fridge handle. “There’s another interview tonight?”

“I’m very popular, it seems. I didn’t even know that many people read the newspaper.”

“It’s New York, Chlo. It’s a thing here.” The fridge has been freshly stocked with her favorite yogurt, the grape one that Chloe hates. She smiles, grabbing one. “Do you know this one’s name, before they get here and I have to be rude again?”

“Please, you love it.” Chloe doesn’t look up from her phone, smiling. “Her name’s...Ella.”

Beca pulls the top off her yogurt, hopping up to sit on one of the bar stools at their little island in the center of the kitchen. She spins around, legs extended until they bump into the other stool. “Hmm. Women are less likely to be serial killers, I think. Statistically.” She leans over to drop the top into the can beside the bar. “Or they’re better at not being caught.”

“You’re really so much fun,” Chloe says, dragging the last word out through her teeth, eyebrows lifting as she scrolls through her phone.

“Excuse me for trying to keep you safe,” Beca grumbles, reaching behind her to grab a spoon from the drying tray. “She could be a Juana Barraza.”

“Female serial killer? Professional wrestler, offed a bunch of old ladies? Got like, 800 years in prison, or something.”

Chloe finally looks up from her phone, lip curled and eyebrows furrowed. Beca thinks she’s supposed to look disgusted, but she just looks concerned. “I wish you didn’t know all the weird things you know.”