The MCS James McCallen is burning. 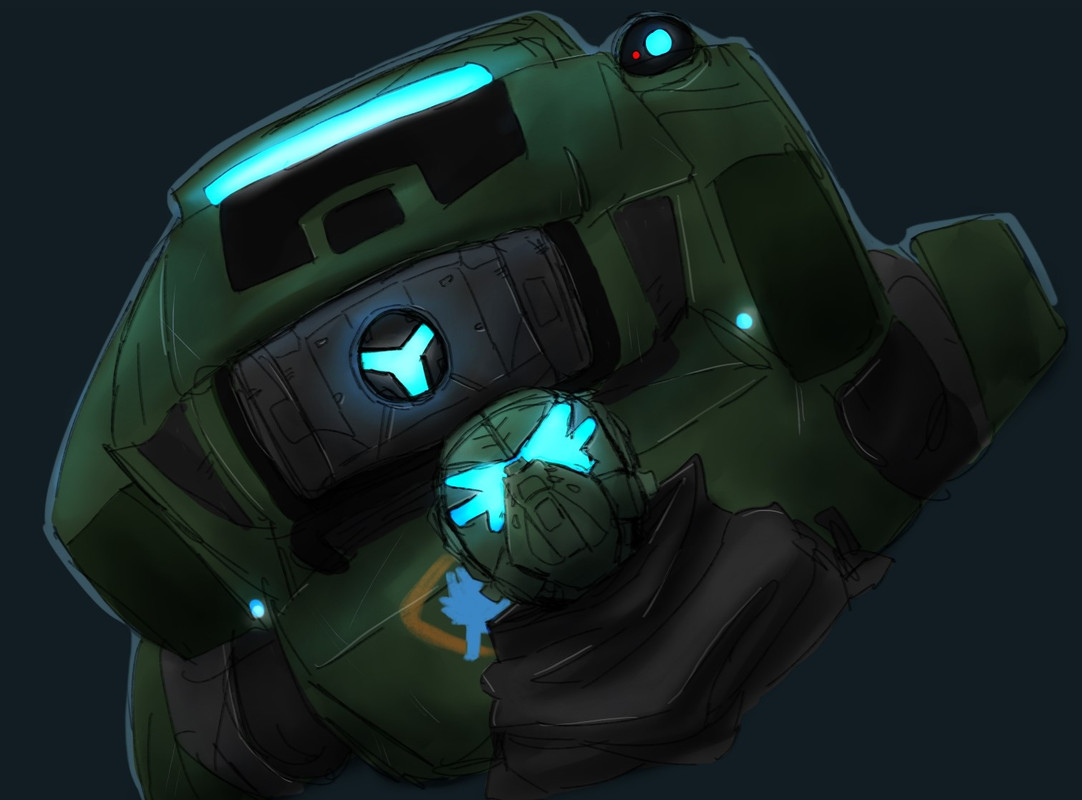 
The ship that she just launched from was on fire .

"Broadsword command, this is the 9th militia fleet! We've been ambushed by A.O.D on planter Typhon!"

Her comms were lighting up with activity.

"IMC north port, north port! This is no ordinary operation!"

Her pod was partially on fire

She was positive that she would be burnt to a crisp before her pod even hit the ground to give support.

"We're seeing a lot of anti- orbital defense! Decompression on decks 5 through 9!"

Her comrades were dying in the pods next to her.

Her head jerked as turbulence rocked her lifeboat, flames caressing the window of her pod.

"We are going down! WE'RE GOING DOWN!"

"This is the MCS James McCallen, we are going down."

An explosion sounded over the fleet's comms and then silence.

The CPU to her lifeboat wakes her up, "occupant: militia sniper Class 1- Quinn Lancer" she sucks in a breath as her vision swirls, probably from a concussion "stabilize, 250 milligrams of Sansufentanyl. Caution temporary side effects - nausea, dizziness, impaired motor functions" the computers monotone voice fades in and out, the pods door bursts open and smoke piles in as it comes off it's hinges. The ground shakes and Quinn sluggishly makes her way out of the torn lifeboat.

A group of militia rifleman are shooting and shouting around her, several of them are gunned down on the spot. "Look out! spectres!" She ducks behind a large rock just as a bullet lodges into the dirt where she was once standing, She shakes her head clear. She takes a moment and then the soldier whips her sniper out, taking aim at the enemy spectres and killing them off. She gets a few rough thanks for the cover fire and then she pushes up with the few men lagging behind. She takes a few more spectres out and once again flirts with death as an MCS pod takes out a few riflemen right in front of her, rocks and dirt fling up and smack into her armor leaving scratches and chipped paint. The sniper bites her lip and moves on, she would grieve for them when all was safe.

A grunt next to her loses his head, and she takes cover once more, quickly she clicks in on her comm. "Are there any pilots in the area! We need backup!" Her voice is surprisingly steady, "This is captain Lastimosa. I've got a fix on your location, I'm on my way" her mentor replies, and she almost sighs in relief. Quinn pushes ahead pulling her knife out and sliding into an IMC grunt, she slices his calf open and as he opens his mouth to scream her hand reaches up and grips his chin from behind, Fingers cut into his skin as she tosses him over her shoulder and slits his throat. Footsteps break twigs behind her, she jumps and twirls mid air throwing her knife right into the spectres eye in the process, her pistol comes out as she lands in a crouch head shotting several other IMC soldiers. Rain hits her helmet as she lets out a puff of breath, Quinn grabs her knife and takes off to re-group with her squad. When she catches up, several bodies are littering the ground before her, and fire lights the woodland area up in a bright orange glow. A loud screech sounds from above her, and she only gets a second to see what the hell was causing the noise before it slams into the ground right next to her and is she sent spiraling backwards into a boulder.

Her vision swims, but she can make out an enemy tone. She blinks trying to move as it begins crushing her squad one by one, the Titans glare (to her horror) moves to her crumpled form. And starts stomping right at her, it was sheer luck that a volley of rockets stops the Titans foot just as it's about to come down on her. Quinns head rolls to the direction the missles come from, seeing her teacher and his Vanguard class titan BT-7274 come out of the dust and starts throttling the enemy. The friendly titan charges, grabbing the tone and tossing it over its gigantic body. Once it doesn't move the cockpit door opens and Lastimosa comes running out towards her, still surveying the area with his gun up and aimed. " shit, Lancer your in bad shape. Hold on." he says worriedly, the pilot pulls her into a set of thick foilage getting her out of sight and harms way. He pulls out a syringe "this might knock you out, but you'll be ok when you wake up." He says jamming it into her leg "Lastimosa, hostile titans inbound. Apex predators" BT warns his pilot. Tai nods "copy that BT, Mercenaries. Stay down Lancer. BT let's go!" The pilot says getting up. Quinn just barely manages to catch his hand and he looks back down to her "ca- careful Captain, please-" his helmet opens for a split second, and he gives the woman a reassuring grin and 😉 and pulls from her grip.

Her form is numb and bleary eyed as Captain Lastimosa embarks back into BT, her vision blinking in and out. The group of mercenaries Tais titan mentioned landed around him, and they both put up one hell of a fight. But eventually they were surrounded and our numbered,  Quinn can only stare in horror as BT is overrun. She tries to call out and warn him that an enemy Ronin had teleported behind him, but nothing comes out as she watches the Titans hand rip out the vanguards power source and he's sent barreling into the ground as electricity jolts though him and shuts his body down.

She doesn't remember passing out.

Quinn comes to what feels like seconds later. One of the mercenaries were looting the corpses that littered the ground a few feet infront of her, black spots swim around in her vision. The man before her was rugged looking, thick furs from whatever alien creature he had hunted covered his neck and back making him bigger than he actually was. He huffed, kicking the bodies around and grabbing anything he saw of value. A legion class titan appears in her line of sight, the cockpit door opens and it's pilot stands up "we have 18 hours. 18 hours until the ark is sealed and ready" the pilot: was a well built man. Short cut black hair, and scars covering the skin of his arms. Armor that was battle worn and colored red, with black lining. His voice was thick with an Australian accent muffled by her ringing ears. The apex pred jumps out of his legion and comes stalking towards the fur lined pilot, "oi! Richter! Leave the corpses alone, you sick bastard.we've got a job to to eh?  We make bodies not clean them, let's go" he says pushing the rugged man's shoulder. Richter snorts and looks back at the bodies, but listens to his seemingly boss anyway. And makes his way back to his titan. Quinn tries to keep her eyes open as they leave, but her vision tunnels once again and everything goes black.


She wakes up again to something dragging her, when her vision finally clears a prowler is inches away from her face and drooling. It hisses at seeing her move and goes to snap it's jaw shut on a peice of armor attached to her right leg. She screams through her teeth as it shakes its head back and forth, whipping her around in the process. She is barely able to reach her pistol, But just as her fingers brush the handle of her gun bullets fanfire above her head. The prowler startles and let's go of her as a bullet lodges itself into it's shoulder, at it's distraction Quinn quickly pulls her pistol out of its Holster and shoots it throught it's teeth. Blood splatters across her eyes and face mask, the cloth around her mouth damp and thick. She takes a moment to breath, and then starts to stand. The sniper takes a look around, trying to find where the gunfire came from. Her eyes end up meeting a titans. That titan being BT, her eyes widen and she hobbles as quick as she can over to him. The vanguard attempts to stand, but having little to no power he ends up collapsing once more.

The cockpit opens and a body comes sliding out coughing and hacking, she nearly trips.

Quinn drops to the ground next to him, pulling Lastimosas jerking body into her lap. His eyes are bloodshot, and blood: some old and some new, was dripping from his mouth, and nose. Quinn hooks an arm under her mentors head, hoping to offer some kind of comfort. Tai coughs, weakly grabbing her left hand with one of his own as the other hits a button on his helmet to open it's hatch. He sucks in a strangled breath "BT, transfer authorization to new pilot, link-" he jerks up with a cough "Bravo- Tango, seven two-seven four" his eyes move to Quinn's "Lancer. Take my titan. Use my helmet and jump kit." He pulls her closer "this is the real thing-" his eyes glaze over, and his head lolls back "Take care of him"  his grip weakens and his hand drops to his side. Her head drops to his chest, and she breathes.

"I always wanted to be a pilot. But not like this, never like this " Quinn whispers putting the last rock to a grave unworthy of the body that laid beneath on top, "I'm sorry." The now pilot takes a moment of silence for her fallen teacher, her friend. One more dog tag to add to the pile at Harmony, if she even ever made it back home. The woman looks up, taking in the damaged vanguard class titan just to her left. It didn't feel right to call him hers, she didn't think it would ever feel right. Quinn sighs through her nose and stands, grabbing the helmet that was hooked to her belt. She took a moment to admire it, albeit solemnly admire it. Lastimosas signet, a blue prowler highlighted by a white triangle made a sad smile come to her lips. Tai Lastimosa was an amazing pilot. And a fantastic person, she wouldn't fail him. So pulling in a powerful puff of air she puts the pilot helmet on, the scent of Lastimosas favorite cigar and gun oil hit her right away And threatened to bring the tears she has been fighting against this entire time back with a vengeance, but she stands strong and reads the bright blue text that pops up on the left side of the helmets visor.

Guess she was a pilot now.

None of these fics are in chronological order lmao

LtBladewing as well as 4 guests left kudos on this work!