It's almost election time! Being a member of the Organization for Transformative Works (OTW) means being able to vote for its Board of Directors. This helps affect how projects such as the Archive of Our Own, Fanlore, and Transformative Works and Cultures are run now and going forward. This year, our election for the Board of Directors will be held from August 12 to August 15. (Access the full Elections Timeline for 2022).

In order to vote, you need to be a member of the OTW by midnight UTC on June 30, 2022 (What time is that for me?). That means that you have to have made a donation of US$10 or more between July 1, 2021 and June 30, 2022, AND have chosen the "membership" option. If you're unsure whether this applies to a donation you've made, please contact our Development & Membership team.

If you participate in this voter registration drive, you will receive a specially designed icon, only available during this drive. Thank you for your support of the OTW! Register to vote and donate today!

The Organization for Transformative Works is pleased to announce the following candidates for the 2022 Election (in alphabetical order by given name):

Candidates’ full legal names will not be publicly posted this year unless they are appointed or elected to the Board.

E. Anna Szegedi is stepping down from her position on the Board for personal reasons, and so there will be 3 open seats in this year's election, one of them a partial term of two years. The candidate who places third will be elected to this seat. We are grateful for Anna's service and thank her for her work and dedication.

Because we have 3 seats to be filled and 5 candidates, the 2022 election will be contested – that is, the members of the OTW will vote on which candidates fill the seats.

The Elections Committee is excited to introduce the candidates to all of the members of the OTW! Included in this post are links to short Bios and Platforms written by the candidates. This post also marks the beginning of our Q&A period, during which we invite the public to submit questions for the candidates. Additionally, we will be holding a series of live chats – dates and times for those are to be announced based on candidate availability. Information on the voting period and how to vote will also be posted shortly.

In the meantime, there is a timeline of Elections events available here for your reference. Read on to learn more about our candidates and how you can submit questions for them!

We asked each candidate to provide us with a Bio that sums up their professional and fannish experience, as well as to write a Platform about their goals for their term on the Board by answering the following questions:

You can read both the candidates’ answers to these questions and their bios by following the links below.

Candidates will also answer questions from the public. Anyone may submit questions via the Elections form. Please submit all questions by 11:59pm UTC on June 26 (what time is that where I live?). All candidates will answer each question submitted, subject to the following restrictions:

The posting date for answers will be chosen depending on the number of questions received. Posts will be spread out, arranged by topic, to make it easier for voters to read all the answers. 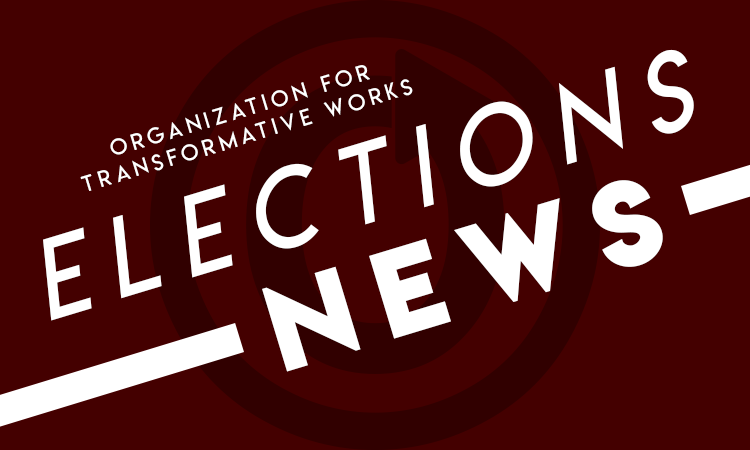 The Organization for Transformative Works' Elections committee is pleased to announce that the timeline for the 2022 election for new members of the Board of Directors has been posted!

This year’s election will be held August 12-15. This means that the deadline for volunteers to declare their candidacy is June 17.

As usual, the election membership deadline is June 30. If you're interested in voting, please make sure your membership is active as of that date. Please note that your donation receipt will be dated in US Eastern Time, so if your donation is listed after 19:59 on June 30, 2022 on the receipt, you won't be eligible to vote. If you are unsure whether your donation was made before the deadline, please contact our Development and Membership Committee by using the contact form on our website and selecting "Is my membership current/Am I eligible to vote?".

You can find out how to become a member on the Elections website, or if you’re familiar with the process, you can donate here!

If you want to know more about the election process in general, you can check out the Elections Policies.

We’re looking forward to an active election season with ample communication between candidates and voters, and we hope you’ll be a part of it. Don’t forget to follow the Elections committee on Twitter to keep up to date with the latest news!

If you have any questions or comments, don’t hesitate to contact Elections.

Comments on this post will close 2 weeks after the end of election season, September 6th, 2022.

Now that the 2021 election is over, we're happy to share with you our voter turnout statistics!

Our voter turnout is lower than that of last year, which had a turnout of 21.4%.

Elections is committed to continuing to reach out to our eligible members to encourage them to vote in elections. Whoever is elected to the Board of Directors can have an important influence on the long-term health of the OTW's projects, and we want our members to have a say in that.

For those who might be interested in the number of votes each candidate received, please note that our election process is designed to elect an equal cohort of Board members in order to allow them to work well together, so we do not release that information. As a general rule, we also won't disclose which of our unsuccessful candidates received the fewest votes, since we don't want to discourage them from running again in the future when circumstances and member interest might be different. However, as there were only 4 candidates this year, with two elected and one appointed, revealing that information is unavoidable.

Once again, a big thank you to everyone who participated at every stage of the election! We hope to see you at the virtual polls again next year.

The Elections Committee would like to thank all of our candidates for their hard work in this year’s election. With that, we are pleased to present the results of the 2021 Election.

The following candidates (in alphabetical order) have been officially elected to the Board of Directors:

Additionally, the Board of Directors is sorry to announce that director Kati Eggert, who was elected last year, is stepping down from her position on the Board for personal reasons, effective immediately. We are grateful for Kati’s service and thank her for her work and dedication.

To fill the vacant seat, the Board is appointing the candidate who placed third in this election, Antonius Melisse, to join the Board of Directors and serve the remainder of Kati’s term (two years) starting on October 1. This will guarantee that we continue to have a full Board until the next election.

The new members of the Board will formally begin their term overlap on October 1. We wish them well with their terms.

With that, the election season comes to a close. Thank you to everyone who got involved by spreading the word, asking the candidates questions, and, of course, voting! We look forward to seeing all of you again next year.

The election has opened!

Every OTW member who joined between July 1, 2020 and June 30, 2021 should have a ballot by now. If you didn't get one, please check your spam folder first, then contact us via our contact form. Please note that your donation receipt will be dated in US Eastern Time, so if your donation is listed after 19:59 on June 30, 2021 on the receipt, you won't be eligible to vote. If you are unsure whether your donation was made before the deadline, please contact our Development and Membership Committee by using the contact form on our website and selecting "Is my membership current/Am I eligible to vote?".

The election will run through August 16, 2021, 23:59 UTC; check this time zone converter to find out what time that will be for you.

Once you've voted, you can head over to Twitter and use the hashtag #OTWE2021 to meet and chat with other voters! We'd love to hear from you!

At this time, all members of the OTW who are eligible to vote should have received an email linking to the voting instructions for 2021. The subject line was "Voting Instructions for Organization for Transformative Works (OTW) Board Election". Please note that anyone who didn’t receive this email is not on the voter rolls this year and will not receive a ballot.

The voting instructions email contains a link to a test version of the ballot. Please follow that link to make sure that the page displays correctly and the candidates are visible. If not, please ensure you are not blocking JavaScript from ajax.googleapis.com, bootstrapcdn.com, and/or opavote.com.

If you are an OTW member and didn’t receive this email, please do the following:

The Elections season is in full swing! We have chats with candidates coming up soon. You can also find links to the candidates' answers to your questions at the bottom of this post.

There will be four public chats, all of which will last 90 minutes. All of them will have 2 candidates in attendance. Chats will take place in our public chatroom.
They are scheduled for:

During these chats, chat attendees will have the opportunity to ask the candidates questions not already covered in their platforms, bios, and Q&A, as well as to ask individual questions of specific candidates. New questions will only be accepted for the first hour of the scheduled chat time to make sure candidates have time to finish them all.

We hope that you can join us for one or all of these chats!

Please note that though the link to the public chatroom is already active, chatting capabilities will not be enabled until approximately half an hour before the chats begin. Read on to learn more about using Discord.

When we posted the Board candidates' bios and platforms, we asked the public to submit additional questions for them. Once again, our sincere thanks to everyone who did so! We have been posting groups of questions as the candidates finished them, and 2 have been posted so far. For the categories that have not yet been posted, the dates they will be posted are listed in parentheses.
To navigate answers by individual candidate, please use the links below:

The following is a list of the topics covered by the questions. Clicking on a topic will take you to the tag containing all the candidates' answers on that topic.

To read all the posts regarding Q&A, simply select the 2021 Q&A tag.