We're pleased to announce that, in the coming days, we'll be rolling out the first part of our blocking and muting features: the ability to block specific logged-in users from commenting on your works and replying to your comments.

Blocking and Muting: A Refresher

We'll be implementing two sets of features to help users curate their own experiences and add a layer of protection against harassment, without making it harder for people to create and interact with content on the Archive:

Because applying these concepts to all of the Archive's numerous and often interconnected features at once would be a massive undertaking, we're taking a gradual approach that will allow you to block and mute users in some areas while we continue to work on others. 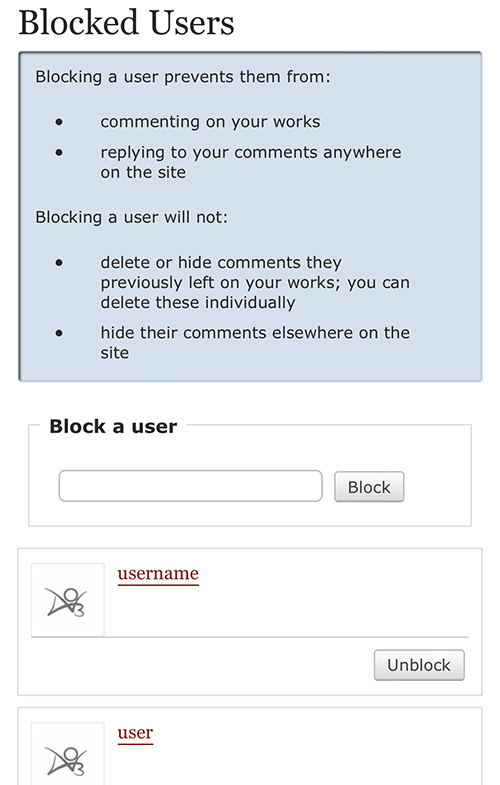 With this first release, we're focusing on blocking comments from logged-in users. When you block a user, they will no longer be able to comment on your works or reply to comments you've left on news posts or other creators' works. They will also be unable to edit existing comments or replies they've left you.

The block will persist even if the blocked user changes their name.

You can block a user by pressing the "Block" button on their profile, dashboard, or comments. Users you've previously blocked can be unblocked from these locations as well.

You can also block a user by entering their name on the new Blocked Users page, accessible by following the "Blocked Users" link on your preferences page.

The Blocked Users page lists all of the users you've blocked. Other users will not be able to see who you've blocked -- the only people with access to your list of blocked users will be you and site admins with certain access levels.

If you suspect someone you've blocked is still commenting on your works or replying to your comments elsewhere on the Archive, contact the Policy & Abuse team.

We're working on a similar interface for muting logged-in users, but in the meantime, you can mute users, works, series, or external works by creating a site skin and using the following CSS:

In addition to the upcoming blocking and muting features, there are a variety of existing ways to control your Archive experience.

Our Unofficial Browser Tools FAQ lists some third-party scripts that let you filter out unwanted content, and here are some built-in options for managing various features:

We're always working on more options like this, so be sure to check back regularly -- we announce most major changes here at AO3 News shortly before they're released. You can also follow @AO3_Status on Twitter or ao3org on Tumblr to stay up to date.